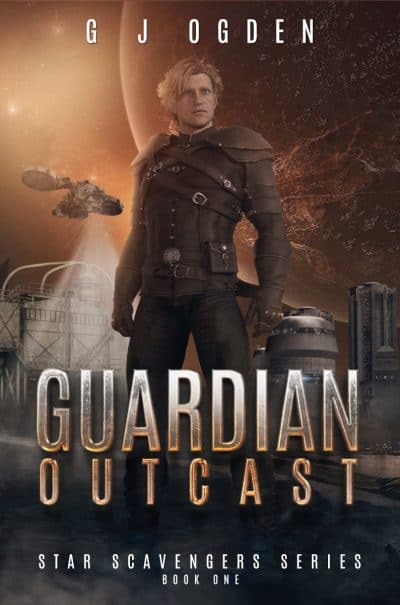 Guardian Outcast is a thrilling space opera adventure. If you love space sci-fi like Firefly and Stargate blended with the mystery and treasure-hunting adventure of Indiana Jones, you’ll love the Star Scavenger series. Begin reading this thrilling five-book saga today.

Hudson Powell had always been a drifter, but after his father died, he vowed to turn his life around. He quit freelancing as a starship pilot and joined the Relic Guardian Force as a 38-year-old rookie.

That was a big mistake.

The RGF police the alien wrecks that have been found on every portal world discovered in the last century. They make sure the relic hunters pay taxes on the priceless alien tech they scavenge from the hulks. The snag is that the RGF is corrupt. And Hudson’s training officer, Logan Griff, is the worst scumbag of the lot.

Pushed over the edge, Hudson stumbles upon the exhilarating world of the relic hunters and meets the equally intoxicating and deadly mercenary, Tory Bellona.

Cast out from the RGF, Hudson Powell chooses a new path. But the discovery of a unique alien crystal will set events in motion that cannot be undone.

One decision can change the course of an entire civilization. One discovery can change your life.