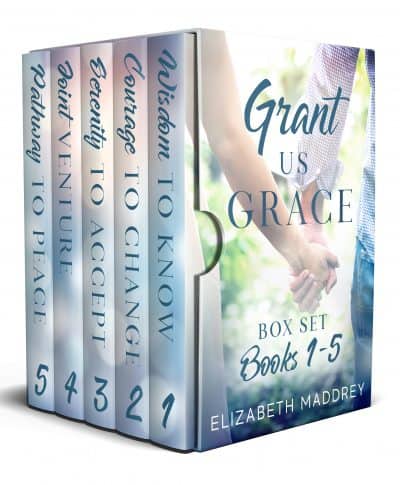 Fall in love with a group of friends as they wrestle with the challenges of living for Jesus in today’s world. Just like you and me, they make bad choices, suffer consequences, and ultimately find that Jesus offers grace, forgiveness, and peace.

This omnibus edition includes the complete Grant Us Grace series and is more than 1000 pages of realistic, relatable romance.

Wisdom to Know
Lydia Brown has taken just about every wrong turn she could find. Overwhelmed by guilt, she turns to drugs to escape her pain. After a single car accident lands her in the hospital facing DUI charges, Lydia is forced to reevaluate her choices.

Kevin McGregor has been biding his time since high school when he heard God tell him that Lydia Brown was the woman he would marry. In the aftermath of Lydia’s accident, Kevin must come to grips with the truth about her secret life. But will he choose to love when there’s so much to forgive?

Courage to Change
When Phil Reid became a Christian and stopped drinking, his hard-partying wife Brandi divorced him. Reeling and betrayed, he becomes convinced Christians should never remarry, and resolves to guard his heart.

Allison Vasak has everything in her life under control, except for one thing. Her heart is irresistibly drawn to fellow attorney and coworker, Phil. Though she knows his history and beliefs, she longs to make her feelings known.

As Phil and Allison begin to work closely together, both must reevaluate their convictions. But when Brandi discovers Phil’s new relationship, she goes on a rampage. Can Phil and Allison’s love weather the chaos Brandi brings into their lives?

Serenity to Accept
Karin Reid has never had much use for God. There’s been too much pain in her life for her to accept that God is anything other than, at best, disinterested or, at worst, sadistic. Until she meets Jason Garcia.

After his own mistakes of the past, Jason is committed to dating only Christians. He decides to bend his rule for Karin, as long as she comes to church with him.

As their friendship grows, both will have to decide if they’ll accept the path God has for them, even if it means losing each other.

Joint Adventure
Laura Willis is busy planning her wedding to Ryan when she catches him cheating. Again. This time with her best friend. She throws her fist, and her ring, in his face and immerses herself in work at Brenda’s House of Hair. But the salon is awash in drama too.

Laura’s coworker hairstylist, Matt Stephenson, is searching for other employment options. Deciding to take a risk, he determines to open his own salon and invites Laura to partner with him. Will this joint venture be more than either of them bargained for?

Pathway to Peace
Lindsey Bowers has spent five years trying to escape her mistakes. She’s created a life, such as it is, where few people know her history. If that means she has to keep people at arm’s length, so be it.

Gavin Harder is ready to tackle the future. Newly relocated to the D.C. area, he plans to spend Christmas with his grandmother and get settled before attending the Police Academy in January. He’s can’t wait to protect and serve with his new brothers in blue.

When Gavin and Lindsey meet, he makes it clear he’s not looking for a relationship. But the instant attraction he feels has him rethinking that decision. Before long, attraction turns to friendship with the hope of something more.

If they can move beyond the secrets they’re both keeping.

If you love Christian contemporary romance series that focus on engaging characters, strong communities, and deep faith—you’ve come to the right place.