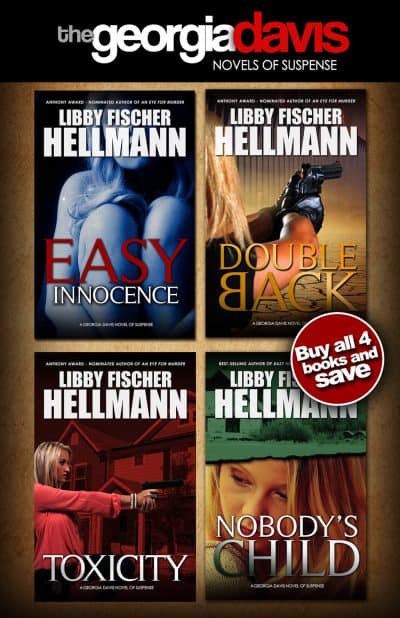 PI Georgia Davis burst on the scene in Libby Fischer Hellmann’s suspense thriller Easy Innocenc (2008). That was followed in 2009 by Doubleback, Toxicity and now Nobody’s Child, 2014. FOUR of the FIVE thrillers are now together at a very affordable price.

PI Georgia Davis burst on the scene in Libby Fischer Hellmann’s suspense thriller Easy Innocence (2008). That was followed in 2009 by Doubleback, a cross-country thriller that reunited Georgia with Ellie Foreman. Toxicity, the prequel to the thriller series written when Georgia was still a cop, was released in 2011. Nobody’s Child, 2014, in which Georgia discovers a half-sister in big trouble, has now joined the others so that FOUR of the FIVE thrillers are now together in one volume at a very affordable price.

Freshly-minted PI Georgia Davis investigates the murder of a high school girl and finds out how far teen girls will go for approval from their peers.

PI Georgia Davis and Ellie Foreman team up after the kidnapping of a young girl triggers a series of more deadly events.

Ten years before Easy Innocence, three bodies turn up in quick succession—all of them dumped in waste disposal dumpsters or landfills. Officer Georgia Davis, her boyfriend detective, and his partner team up and find much more than they bargained for. “The Georgia Davis series may just be one of the best crime thriller series being written today.” Seattle Post-Intelligencer

Nobody’s Child
Georgia discovers a half-sister who’s in big trouble. But rescuing the girl will bring Georgia back to confront an old enemy.

“Thrilling . . . Hellmann ratchets up tension with every chapter.” —Publishers Weekly