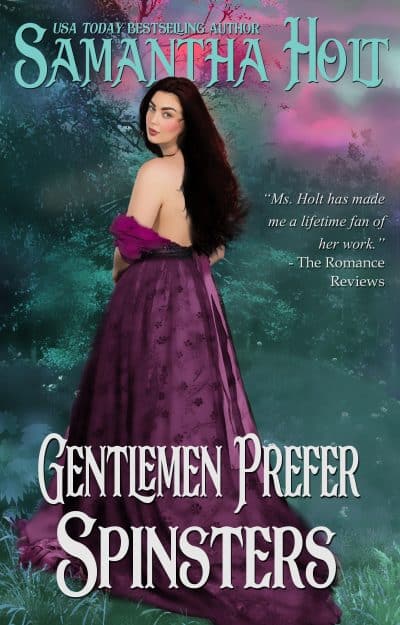 Well, Merry understands the rules of the Spinsters Club fully, considering it was her idea in the first place. When one of her good friends loses her heart to an utter rogue and is ruined forever, she’s determined that the life of a spinster is for her. Thankfully, she’s not alone. Her three dearest friends have had their share of heartbreak and resolve to join her. No matter what the demanding mamas and papas of the world say, they will not give up their spinsterhood.

Particularly not to the handsome Lord Harcourt Easton, the Earl of Langley. Merry has always liked Harcourt—after all, he is her brother’s best friend—but she cannot fathom his sudden interest in her. He was well known to be quite the rogue at times, and she’s hardly the sort to attract the attention of a rake.

But Harcourt has loved Merry for some time now. And he’s determined to make her see that. If only he could get past this stubborn determination that she should never marry and convince her he’s the man for her.

The death of her father and some strange incidents that put Merry in danger might not be ideal circumstances to woo a woman, but Harcourt is willing to make the best of a dire situation—especially while Merry needs a shoulder to cry on.

Harcourt could well be the most amazing man she knows, and Merry cannot help but be grateful for his support, but she cannot very well turn her back on the Spinsters Club so soon . . . can she?