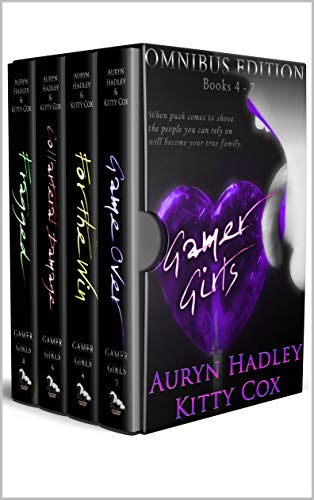 The wildly popular Gamer Girls Series features strong women and the men who love them. Included in this box set is Book 4: Fragged, Book 5: Collateral Damage, Book 6: For the Win, and Book 7: Game Over. Over 650 reviews on the individual books!

Fragged (Book 4)
Some things are worth fighting for.

Riley’s life is better than it’s ever been before. She has the love of her life, a family made from those she cares about, an adorable “little” rescue dog, and even her horse business is doing pretty good. Everything is great. Everything is wonderful. At least on the surface.

While she has an army of friends willing to fight beside her, she wasn’t ready for this. She’d prepared for some bullying. Maybe a few more embarrassing stories to come out. But this?

Someone’s going to get hurt.

And she’s terrified it won’t be her.

Collateral Damage (Book 5)
Even Heroes need to be saved sometimes.

Special Agent Jason Raige is a complete failure as an FBI agent, but it wasn’t like they gave him a choice. He could serve his country or sit in a military prison. He chose to serve. Now, they have him on a case that’s impossible to solve.

Still, he won’t give up. Catching these bastards is the only way he knows to keep his own demons at bay. The doctors call it PTSD. He calls it living hell. Even worse, the only one he can talk to about it is his service dog.

Until he meets her.

For the Win (Book 6)
When you have nothing else to lose, you have everything to gain.

Rhaven grew up hiding behind the keys of a computer or the controller of a console. It was easier than trying to face the real world. Out there, she was a lie. Out there, people called her Ethan and assumed she was a man.

Because that was what her birth certificate said. Unfortunately, she could only be her real self online and at the gamer events she was so addicted to. Around her hometown, people just assumed she was a typical little gay man – not that they were ok with that either.

Then the man of her dreams decides to drop in for a casual visit, and she doesn’t know what to do. Meeting with him means letting him see the version of herself that she’s always hated. She could tell him no, but she really doesn’t want to. After all, this guy is perfect.

Game Over (Book 7)
In order to win, sometimes you have to risk everything.

The incel group, Kings of Gaming, has hit too many of the top gamers. In big ways or small, they’ve all suffered. For Special Agent Jason Raige, this case has become his life – in ways he never expected.

These victims are now his friends. They’ve been there when he needed them the most, and he’s made them his informants. Together, they’re a virtual army made of geeks and hackers. One he’s about to unleash on the men who are trying to destroy any woman they can.

That’s the biggest mistake they’ve ever made. If these fools think this will make him back off, they’re about to get a big surprise. Fighting battles online is one thing, but when it’s taken to the real world? That puts them in his crosshairs.

This is going to be a death match.
One way or another, the game is over.

The Gamer Girls series features strong women and the men who love them. Contains graphic language and situations that are suitable for a mature audience. These are standalone novels that move forward a larger story.