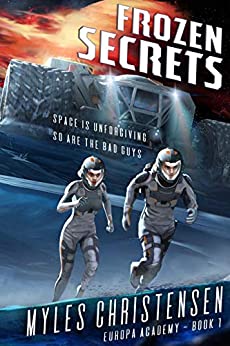 Max is a grounded teen with the soul of a space explorer. Despite trying to stay out of trouble, his snooping lands him in the middle of an inter-planetary conspiracy, fighting those who will stop at nothing to keep their secret hidden on Jupiter’s frozen moon, Europa.

He has trouble following the rules on Earth.

Jupiter’s moon could kill his curiosity for good.

Thirteen-year-old Max Parker is a grounded Earthling with the soul of a space explorer. So when he learns his family is relocating to Jupiter’s moon, Europa, he readily agrees to stay out of mischief. But his promise is soon forgotten, and his snooping lands him on a shuttle doomed for a fiery disintegration.

Convinced someone sabotaged the craft to cover up the theft he witnessed, he digs into the incident. Dodging a series of deadly accidents, he follows the clues to an abandoned outpost and discovers a secret that could blow the lid off a moon-wide conspiracy…

Can Max solve the mystery before his interplanetary escapade gets him killed?

Dive into the unforgettable, space-travelling action!