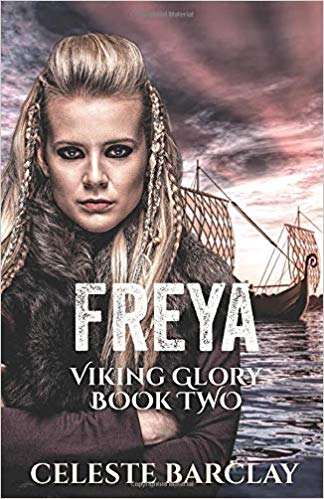 What happens when an immovable object meets an unstoppable force? Sparks fly and love blooms.

Freya Ivarsdóttir is not only the daughter of a jarl and sister to a future jarl but a well-renowned shield maiden. Committed to fighting the evil forces threatening her tribe and her neighbors, Freya does not welcome the attention of Erik Rangvaldson, the son of their neighboring jarl. Forced to work together to defeat their common enemy, Freya must put aside her dislike for the arrogant man who follows her everywhere. Erik may be the most handsome man she has ever seen, but he also aggravates her unlike any other man she knows.
Can Freya trust a man every woman wants?

Erik Rangvaldson has made no attempt to hide his interest in Freya. Attracted to her beauty from the moment he first saw her, and drawn to her fiery spirit from the moment they met, Erik is determined to win Freya over. Sent on a mission together to Scotland, Erik finds himself as focused upon proving his love to Freya as to tracking down the enemy who would steal the land from his father and Freya’s.

Will Erik’s interest last once the chase ends?

Can this couple trust one another when their lives are in danger? Can they work together to not only defeat their enemies but to find love?

Viking Glory is a steamy historical series that will transport you back to the world of the ancient Norse with brave heroes and even stronger heroines. The series follows the lives and loves of five friends. Brother and sister, Leif and Freya, along with their cousin, Bjorn, and their friends Strian and Tyra sail the seas and conquer hearts. This is a four book series where each book can be read as a standalone but is best read as part of the series.