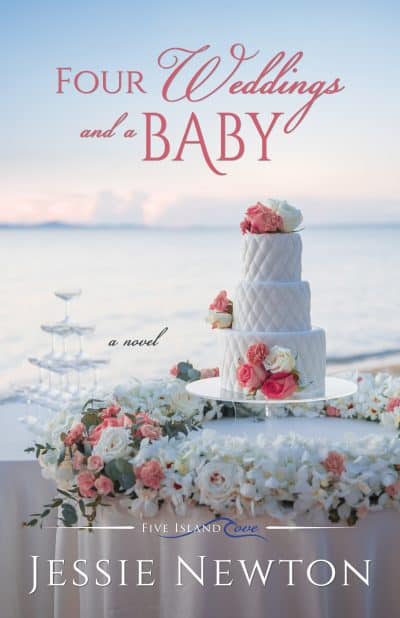 Four weddings and a baby are on their way to Five Island Cove! When Laurel finally uncovers the truth, fingers are pointed in every direction, friendships are threatened, and romantic relationships strained. Who will be standing at the altar for that fourth wedding?

Four weddings and a baby are on their way to Five Island Cove!

Eloise has been waiting for her dream wedding for months. When the Cove Chronicles calls it “the wedding of the year” and literally the whole town is invited, she wants everything to be perfect.

Laurel Baker has just been promoted to detective in the narcotics unit, and her first case is one that’s gone unsolved for a year now. She’s desperate to find out who’s bringing drugs into the cove, but each clue she uncovers leads to one of the women she’s grown to love.

She has to juggle her friendship with Alice, who’s started a new relationship with her children’s guidance counselor. And Kelli, who finds herself with a new boyfriend . . . who happens to live right next door to her. Laurel doesn’t want to hurt AJ, who is off her pregnancy bed-rest now, but her new challenge is meeting her fiancé’s grown children–and the reception isn’t all rainbows and sunshine.

AJ’s determined to go through with the wedding, even if not everyone is thrilled it’s happening. Laurel can always rely on Robin, as she’s planning Laurel’s end-of-summer wedding.

But Robin’s busier than ever as she’s taken on dozens of clients to pay for her husband’s new fishing boat and Duke is off to Alaska again.

Kristen is usually there to pick up any pieces that fall, but this summer finds her moving into a new house for the first time in fifty years.

When Laurel finally uncovers the truth, fingers are pointed in every direction, friendships are threatened, and romantic relationships strained. And who will be the ones standing at the altar for that fourth wedding?

Join Alice, AJ, Kelli, Robin, Kristen, Eloise, and Laurel as they learn how strong they really are, and the great power they hold as women, and as friends, in any circumstance.