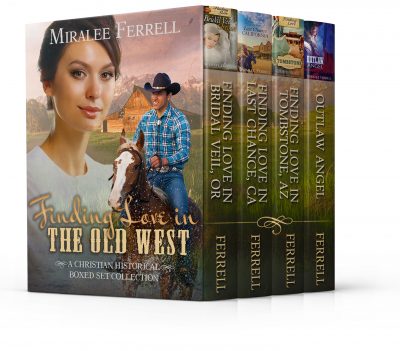 Four full-length historical romance novels set in the Old West by best-selling author Miralee Ferrell. The first book stands alone, the second and third are linked together by characters appearing in both, and the fourth, Outlaw Angel, stands alone, and was first published under the name Love Finds You in Sundance, Wyoming.

Finding Love in Bridal Veil, Oregon
Amidst a backdrop of thievery and murder in historic Bridal Veil, Oregon, a schoolteacher is torn between the memories of a distant love and the man who could be her future. Margaret Garvey had given her heart to Nathaniel, but he left town four years before. Now she’’s giving love another chance, but her decision to build a new life with Andrew is shaken when Nathaniel steams back into Bridal Veil on a riverboat to work at the nearby sawmill. When disaster strikes the town and threatens the welfare of its citizens, Margaret will be faced with the most important choice of her life.

This book has been optioned as a movie.

Finding Love in Last Chance, California
It’s 1877 and Alexia Travers is alone in the world. Her father has died unexpectedly, leaving her burdened with a heavily mortgaged horse ranch. Marrying one of the town’s all-too-willing bachelors would offer an easy solution, but Alex has no interest in marriage.

Instead, she dons men’s clothing and rides the range, determined to make the ranch a success on her own. Help arrives when Justin Phillips, an acquaintance of her father’s, comes to Last Chance with his young son. Justin’s and Alex’s combined effort to save the ranch quickly turns into a fierce competition between cowboy and tomboy.

But when disaster threatens Travers’ Ranch, they must work together to save someone they both love. Can these two independent people learn to depend on God—and on each other?

Finding Love in Tombstone, Arizona
Love and second chances aren’’t easy to come by in a town named Tombstone.

When Christy Grey receives an urgent summons to Tombstone, Arizona, she reluctantly leaves her new life in California. The trip goes from bad to worse when four masked men hold up Christy’s stage. She finally arrives in Tombstone to find her mother ill and her brother trapped in a life of gambling. Desperate for money to support her family, will Christy bow to pressure from the local saloon owners and return to the life she thought she’d given up for good?

Nevada King has problems of his own. He’’s been dodging bullets for years and wants nothing more than to settle down and get married. But he’’s on the run from outlaws bent on revenge, and the one woman who captures his interest recognizes him from the stagecoach holdup. Will Christy turn Nevada in to the authorities, or will the outlaws on his trail catch him first?

Outlaw Angel
Angel Ramirez has been on the run for years disguised as a boy. She wants a fresh start, but can she learn to live like a lady?

On the run from a dangerous outlaw, Angel works her way across several states disguised as a boy and working as a varmint tracker and horse wrangler. After taking a job on a Wyoming ranch owned by a bachelor and his widowed sister, she finally reveals her true identity and must fight to prove her worth as a ranch hand while somehow discovering her role as woman.

Hiring a woman doesn’t sit well with Travis Morgan, and the dark-haired beauty is causing a ruckus among his cowboys. Just as Angel decides she’ll never be able to please her boss, an unexpected surprise arrives from across the ocean and makes trouble on the ranch. Will Angel leave with the person who’s come so far to claim her?