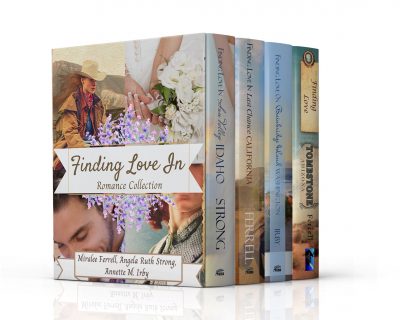 Four full-length novels from three award-winning and bestselling authors will bring you on a journey to real-life locations to discover romance and regional charm.

Finding Love in Sun Valley, Idaho by Angela Ruth Strong
Actress Emily Van Arsdale has returned to her Idaho hometown—with an entire film crew in tow! With its stunning scenery and reputation for hosting celebrities, Sun Valley is the perfect setting for Emily’s newest romantic comedy. Tracen Lake is happy to work as a stunt consultant for the movie but not as thrilled to deal with a bunch of high-maintenance Hollywood types. But Tracen is surprised to discover in Emily a down-to-earth Idaho girl who does all her own stunts and loves the outdoors. As filming wraps up and Emily heads off to her next gig, will she be able to leave Sun Valley—and Tracen—behind?

Finding Love in Last Chance, California by Miralee Ferrell
It’s 1877 and Alexia Travers is alone in the world. Her father has died unexpectedly, leaving her burdened with a heavily mortgaged horse ranch. Marrying one of the town’s all-too-willing bachelors would offer an easy solution, but Alex has no interest in marriage.

Instead, she dons men’s clothing and rides the range, determined to make the ranch a success on her own. Help arrives when Justin Phillips, an acquaintance of her father’s, comes to Last Chance with his young son. Justin’’s and Alex’’s combined effort to save the ranch quickly turns into a fierce competition between cowboy and tomboy.

But when disaster threatens Travers’ Ranch, they must work together to save someone they both love. Can these two independent people learn to depend on God—and on each other?

Finding Love on Bainbridge Island, Washington by Annette M. Irby
Neither of them is ready for a relationship, but love may not give them an out.

Jenna-Shea Brown considers herself a broken therapist. Years ago, she witnessed something that caused PTSD. She can’t let her boss or her patients know about her battle. Who would want to trust her to help them, when she can’t help herself? She’s finally able to find a fresh start in her family’s beach cabin, but the renovations aren’t complete. Her parents have hired her ex-boyfriend to finalize them, but his negligence led to her being in the wrong place at the wrong time all those years ago.

Liam Barrett is trying to prove he’s nothing like his deadbeat dad. He’s working hard, yet still failing. Adrenaline and adventure offer him a diversion, but maybe he can’t escape his genes. He’d like to make things right with Shea, but he’s unsure if she’ll forgive him. Meanwhile, he’s challenged to forgive his father. He’s also worried about Shea and all these episodes she won’t explain. Now that they’re back in close proximity, he’s falling for her again. But can anything heal the past?

Finding Love in Tombstone, Arizona by Miralee Ferrell
Love and second chances aren’t easy to come by in a town named Tombstone.

When Christy Grey receives an urgent summons to Tombstone, Arizona, she reluctantly leaves her new life in California. The trip goes from bad to worse when four masked men hold up Christy’s stage. She finally arrives in Tombstone to find her mother ill and her brother trapped in a life of gambling. Desperate for money to support her family, will Christy bow to pressure from the local saloon owners and return to the life she thought she’d given up for good?