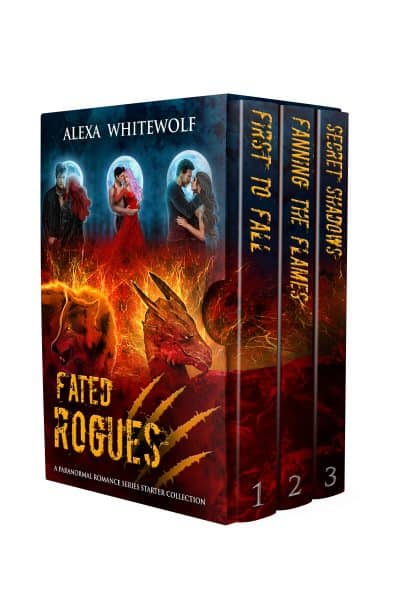 A wolf shifter looking to belong. A dragon shifter trying to undo his brother’s evil. A god hiding a secret that could tear Olympus apart. Myths, folklore, and romance intertwine as unknown forces clash . . .” Steamy stories with rough, rugged, and sexy alpha males.”

Welcome to Rockland Creek, where pack bonds will be tested, friends will butt heads, and love will prevail . . . no matter the odds. Then head to the Carpathians, following two brothers who’ve been at each other’s throats since the dawn of time itself . . . And finally, land in Olympus, where the gods are only as inflexible as they are broken and flawed.

First to Fall
Dominic Kosta never belonged—now he only wants Lucrezia. As does his wolf. But can this feisty redhead be the happily ever after he’s been yearning for? And can he protect her when the town comes under attack by mysterious forces?

Fanning the Flames
Tytus has one goal, and one goal only—to fix what his brother Declan messed up in their ancestral home, and ensure the world is safe once more from his dragon clutches. But his best laid plans get side-tracked by the witch accompanying him on his quest. Can he save her and his brother’s soul? Or is Declan so far gone, he’s without redemption?

Secret Shadows
For millennia, Hades has been the black sheep of Olympus. Privy to a secret only he and Zeus know, he’s taken to drowning his sorrows—and his thoughts. Immortality was working just fine for him, until his leisurely existence is threatened first by a Norse god attacking, next by two immortals hell-bent on being his guardians. And when a mysterious woman invades his dreams, Hades has to wonder if he’s losing his mind, or only now awakening to the darkest of machinations underfoot.

Boxset contains three full-length novels with HEAs. No cliffhangers, but series do continue with other characters past the first books.