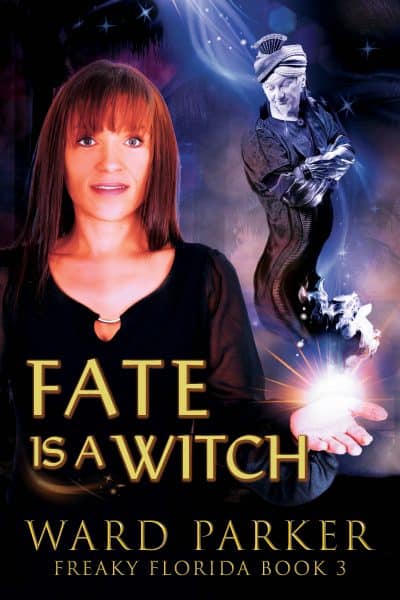 Fate Is a Witch (Freaky Florida)

Can you escape Fate? Can earth magick beat black magic? And can hungry ghouls wipe out all the Hemingway lookalikes? Find out in this thrilling, squirt-coffee-out-of-your-nose paranormal mystery.

After a failed marriage and burnout from her hospital nursing career, Missy Mindle has started over in midlife. She’s now a home-health nurse to elderly vampires and werewolves in Florida. And she’s also improving her craft as a witch.

But suddenly she has two mysteries to solve. First, who is making a series of dangerous magick attacks against her that appear to be tests of her growing witchy abilities? And who is stealing corpses from funeral homes in Jellyfish Beach? When an embalmer is murdered, one of Missy’s patients, a werewolf, is arrested. Can she exonerate him?

She gets plenty of unsolicited advice from a 400-year-old ghost. And also from the Fates. The three ancient Greek goddesses happen to live in a trailer park nearby. They know whether she’ll survive or not, but that’s the one thing they’re not saying.

Fate Is a Witch is a clean, humorous fantasy filled with magic, monsters, and mystery; sarcasm and satire; and, of course, Florida Man. If you love the thrills of urban fantasy, the wit of cozy witch mysteries and paranormal women’s fiction, and a big splash of comedy, this book is for you.