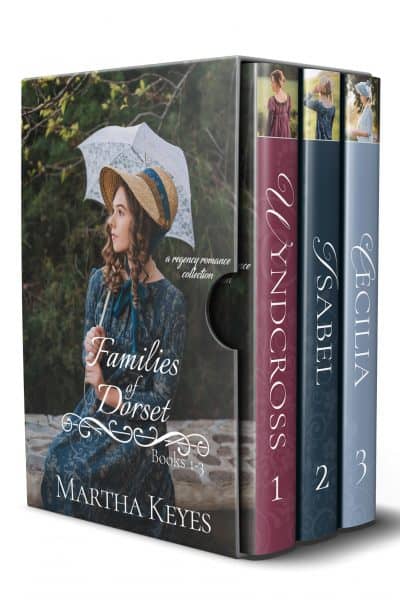 Three sweet Regency romances. A young woman determined to refuse the fortune she desperately needs. A false betrothal turns into something more. Two people from different countries and classes.

Wyndcross
Kate Matcham needs a fortune or a husband. She wants neither. With a tainted inheritance in the balance, she receives one offer to become a scoundrel's mistress and another offer of a marriage of convenience. Before resigning herself to a choice, she accepts the invitation to visit a childhood friend, considering it a last hurrah before embarking on a bleak future.

The visit goes sideways when she falls for the gentleman her friend intends to marry, a man well out of Kate's league--and one who seems to be hiding something. Smuggling has overtaken the county, and it seems that everyone is complicit in the trade that killed her father.

One by one, her options dwindle as she struggles against her strengthening feelings for a duplicitous man, a determination not to hurt her friend, and keeping the promise she made long ago: to stand up to the people who killed her father.

Isabel
When Isabel Cosgrove is informed by her father that he lost her hand in marriage while playing cards with Charles Galbraith—the gentleman she’s been admiring from a distance for years—she is filled with dismay. How can she agree to wed a man whose reason for marriage is part-revenge, part-indifference? Intent on avoiding a painful union where her regard cannot be returned, she concocts a plan.

Charles Galbraith didn’t intend to become engaged as a result of a drunken wager at cards, but after the woman he loves spurns him, what does it matter whom he marries? But even Miss Cosgrove, the fiancée he won by wager, seems intent not to marry him—a fact that both relieves and piques him. She instead suggests a plan that has the potential to temporarily appease her father’s demand of marriage while also winning back the love of the woman Charles truly wants.

But when Charles and Isabel are thrown into the midst of a brewing scandal and another man’s potential disinheritance, their plan begins to unravel thread by thread, challenging what Galbraith thinks he wants—and just how much more time with him Isabel’s heart can stand.

Cecilia
Cecilia Cosgrove’s beauty opens doors and hearts everywhere she goes. With a marquess courting her, the status and wealth her family is counting on her to obtain is finally within her reach—until she meets Jacques Levesque, the French nobleman who immediately pegs her as affected and superficial. While piqued and offended, Cecilia secretly begins to wonder whether he might not have a point.

Poor French émigré Jacques Levesque has been disguised as a French nobleman for almost as long as he can remember, trying his hardest to keep his head down in a society obsessed with rank and high birth. But when Cecilia Cosgrove comes into his life, he finds it hard to maintain his façade—or to want to.

While Cecilia struggles between the desire to please others and the wish to pursue her own course, Jacques's interest in her provokes a powerful enemy intent on taking him down. With love, acceptance, and the future on the line for them both, Cecilia and Jacques must decide whether a life lived behind a mask is any life at all.