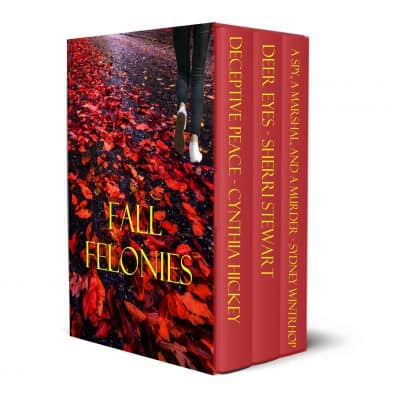 A woman wanting to hide . . . A man who wants to be left alone . . . A mother with a big secret that sets the two on a collision course.

Deceptive Peace
A woman wanting to hide . . . A man who wants to be left alone . . . A mother with a big secret that sets the two on a collision course.

Sierra Wells was told that a person could disappear in Misty Hollow. After she finds out her mother harbored a secret that shattered her world, she certainly hopes so. Except the very person she’s running from finds her and is determined to possess her.

Ex-military Spencer Thorne loves his solitary life on the mountain overlooking Misty Hollow. Until a pretty woman hits a deer close to his cabin. He knows she’s running from something and despite not wanting to get involved, he’s always had a soft spot for anything hurting.

Insanity, obsession, and danger follow them as they try to stop a killer while exploring their growing feelings for each other. Will they survive the terror hanging over the town and stop the man determined to have Sierra?

Deer Eyes
Her eyes reflect fear, but looks can be deceiving.

From the moment high-school principal, Judd Trudeau, sees the fear-filled eyes of the beautiful woman in Acadia Park, he knows he must tread lightly. If he wants to get close, Judd must gain her trust. But those deer-in-the-headlights eyes remain, and his need to protect her trumps his better judgment. She’s running from something. The more he learns about Selah Brighton, the more he realizes looks can be deceiving.

Selah Brighton has reason to be wary, which is why she chose to hide in Bar Harbor, Maine. The fewer people who know her story, the less danger she’ll bring to their lives. It’s not wise to stay in any place for long, but something about Judd Trudeau makes it hard to tamp down her feelings.

A Spy, a Marshall, and a Murder
Ethan

All Ethan wanted to do was guard the treasure. He forgot to ask how far he should go to discourage unwanted visitors to their salvage operation. And he certainly didn’t know he’d fall in love in the middle of it.

U.S. Marshal Robert Bellamy and his friends—a fish and game warden and a weather service cartographer—found evidence of a sunken galleon off the gulf coast. Now that a long-term assignment for Robert has come to an end, he can start searching the coastline for the ship.

After Tessa Mackey Debenheim’s fall from grace as CEO of the Williams Agency in Houston, she bounced from island to island, until she settled on Antigua. Going back to her roots, she set up a thriving PI firm in St. Johns. A chance encounter with a cartographer on holiday leads Tessa and her team of scalawags to return to the gulf coast of Texas.

Nadine Debenheim Bellamy, CEO of the Williams Agency, is once again confronted with the fallout of the shenanigans of her mother. Now Tessa’s back in Texas, and Nadine is left to wonder why? And, does Tessa’s appearance have anything to do with Robert’s sudden disappearance?