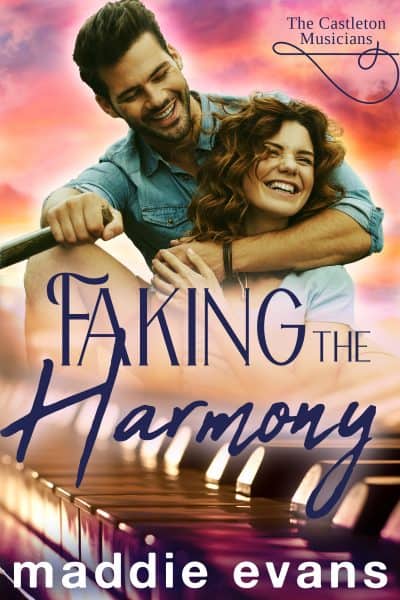 Faking the Harmony (The Castleton Musicians)

Rose needs a date to her cheating ex’s wedding. Declan wants revenge on the woman who tormented his sister in high school. By going together, they can accomplish both. They just need to remember it’s not for real.

Rose just got an invitation to her ex’s wedding, complete with a hand-written note from the woman he cheated with. “I know you don’t have anyone special, but maybe you can bring a second cousin or something?”

Rose doesn’t need to show him up. She plays keyboard in an alternative band and loves her life–but it burns so much that those two are still trying to one-up her. Her bandmates decide she needs a date for the wedding.

Enter Declan, a jazz pianist who’s known Rose for years. He’s the perfect choice for a fake date because the bride had a massive crush on back in high school. Even better, he hates the bride for how she bullied his sister. There’s no chance he’ll fall for Rose. In eleventh grade, she approached him, and he shot her down as “quintessentially not his type.”

The longer they fake the relationship, though, the more Declan has to admit she quintessentially is his type. Rose is feeling the pull too, but after one humiliating breakup, they’re going to have to work a lot harder to harmonize.

The Castleton Musician stories center around life at the Castleton School of Music, the heart of musical life in northern Maine and the pulse–point of the town of Hartwell.