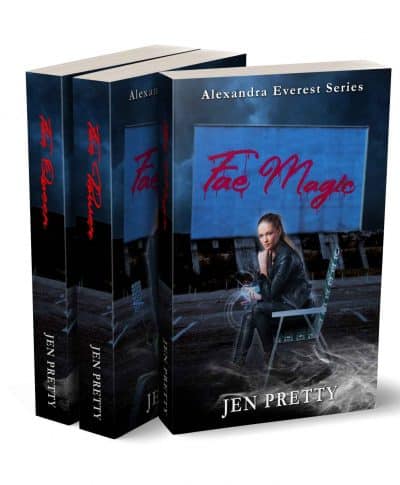 Sometimes nightmares are real. Read the Fae Magic Trilogy now. Lex will travel to new worlds, discover magic she never knew she had, and face monsters made from nightmares.

I was just trying to keep it together, but I was sure a guy was following me. He had strange eyes that made him stand out and I saw him everywhere.

One night a giant man tried to drag me into a waiting car, and the super stalker literally cut off his head. Right there in the alley.
Then he started spouting weird stories about monsters, magic, and strange lands. I didn’t want to believe that my parents had kept a huge secret from me my whole life, but seeing is believing and what I was about to see would blow my mind.

Now I have to get control of some magic this man says I have before the demons of the night take over the world and enslave the humans, killing all the fae in the process. The fate of them all rests in my hands.

No pressure, though, right?

Fae Power
Lex may have made peace between the Fae and the vampires, but her old nightmares aren’t quickly forgotten when she has to travel to a new land with a vampire in tow.

On their epic journey, Armond is abducted by a witch, leaving Lex vulnerable. She must learn to trust the vampire, or she will self-destruct before she has the chance to save Armond. This new foe gathers a following, increasing the rift between the factions of people in this new land, and Lex must help them before it’s too late.

Epic journeys aren’t as fun as they sound.

Fae Queen
Lex accepted her new power, but an unexpected side effect has everyone scrambling to catch up.

The witch still has the new shifter king, Aldridge, in the unknown world beyond the caves and wont give him up easily. But what she takes from Lex might be the thing that finally breaks her.

Lex’ s duck/dragon shifting little buddy, Daisy, has a dark past, but can he face it to save Lex from the darkness that tries to take her under?