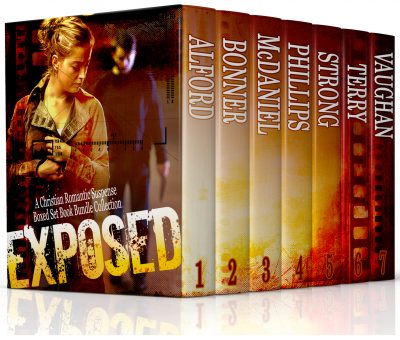 Hallowed Ground by Mary Alford
After a terrorist attack claims the life of her partner, CIA Agent Erin Sandoval would not have survived Blake’s death without the help of fellow agent Jax Murphy. When Erin’s unit is deployed to Afghanistan to find the elusive terrorist the CIA believes responsible for taking Blake’s life, the mission proves to be a setup, wiping out almost the entire team. As the only survivors of the attack, Erin and Jax must cut through a wealth of lies and misdirections to uncover the killer’s identity. Yet nothing prepares them for the truth, and the biggest threat to their survival might prove to be their growing feelings for each other. When you’re running for your life, the most dangerous place to fall is in love.

Fire by Lynnette Bonner
Years ago, teacher Kyra Radell’s brother died because of drugs, so when students in her school start buying a new street drug called Fire—and dying because of it—she’s determined to help. Even if that means putting her own life in danger.

Case Lexington, an undercover cop, has been sent in to pose as a high school senior. He wants her to stay safe, but she’s not willing to listen to a mere student.

Can he protect her and keep his cover intact? More importantly, will he be able to find the drug dealer before any more students—or teachers—die?

Jill Came Tumbling After by Lesley Ann McDaniel
Jill Martin has finally kicked her alcoholic husband to the curb. Now, with two kids and no money, she has no choice but to take a job at the new factory that’s about to open in Madison Falls. When she begins to suspect that the owner plans to illegally dispose of toxic waste, will she be strong enough to blow the whistle . . . or will her boss do whatever it takes to keep her quiet?

Deadly Exposure by Lisa Phillips
Navy SEAL Bradley Harris returns home to find his sister, Senator Rachel Harris, has been abducted. The FBI’s prime suspect is Alexis Calvert, Rachel’s best friend and the woman he gave his heart to long ago. Proving she’s innocent is going to be tough. Especially when he realizes the truth behind Alexis’s public shaming. Bradley must get his sister back and protect the woman he loves before the worst happens . . . and he loses everything.

Dead on Arrival by Angela Ruth Strong
The daughter of the Peruvian President, Maritza Rosado, arrives in Washington D.C. only to discover the world thinks both she and her father died on a plane crash in the Amazon. Worse, the man she’d once considered an uncle has taken over her nation and ordered two consulate workers in the U.S. to assassinate her. Desperate and alone in a foreign country, she hides out in a soup kitchen where youth group leader Levi Parker recognizes her from a recent mission to Peru and wants to help.
Can they possibly take down the crime ring together, or will Levi’s involvement do nothing more than put his life—and the life of every teen in his youth group—at risk?

Termination Dust by Alana Terry
After her mother’s death, Kimmie has no reason to stay under her stepfather’s abusive rule.

No reason, that is, except for her innocent half-brother who would bear the brunt of his father’s anger if Kimmie ran away.

After befriending a compassionate Alaska state trooper, Kimmie is emboldened to hope for a better future. But if her stepfather figures out what she’s up to, he won’t just steal away her chance at freedom.

For Love or Money by Virginia Vaughan
Amy Sullivan left everything familiar to meet an aunt she didn’t know she had. She’s searching for a family connection, yet gets much more when she’s named sole heir to her aunt’s fortune. But someone in this sleepy, southern town doesn’t want Amy to live long enough to collect that inheritance. Deputy Tate Mitchell is determined to discover who wants the money for themselves—and who is willing to kill Amy to get it.