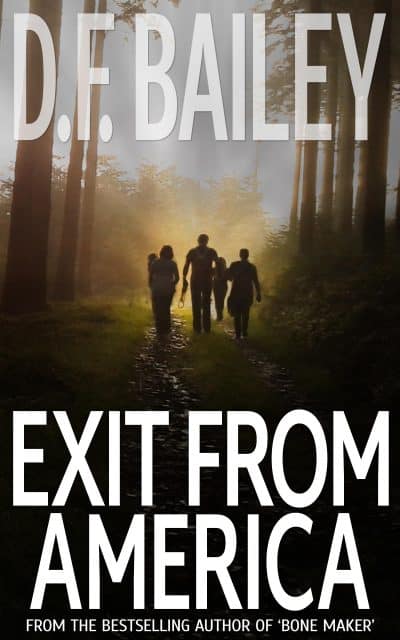 Exit from America is a coiled-up, character-driven novel set in a world on the brink of disaster. Balanced on the edge of suspense and psycho-drama, the novel portrays five disparate souls trying to escape the pending collapse before they are buried in its ruins.

When a stroll down memory lane becomes a rush for the exit.

Shattered by the death of his wife, Doyle Mere returns to San Francisco, his wife’s home town and the city he used to know and love. He plans to settle into Haight-Ashbury and write a memoir, believing that if he can clarify the past it will lead to a more certain future.

But when Doyle is robbed—twice in one day—he realizes that he has to adapt to an unfamiliar world consumed by wildfires, drought, power failure and social collapse. This is not the San Francisco he so fondly remembers. It’s become a palace of wealth and technology for the elite one percent—but inhabited by drug users, criminals and the dispossessed.

After his initial setback, Doyle finds comfort with neighbors in a restored Victorian mansion. Together they befriend a wayward artist whose daughter carries a secret that will soon test everyone’s courage and grit. But is their bond strong enough to overcome impending crisis? When the chaos threatens to strike at the core of this new-found tribe, Doyle must call upon the twin sons he left behind to save them.

When Things Fall Apart, Can the Center Hold?

At the end of the journey, Exit from America leaves you with the two essentials you’ll need in your own personal emergency kit: a road map to freedom, and the will to survive.

A Race to Freedom and Survival

“Another great story of moral revelation, despair and redemption by a contemporary master.” – Lawrence Russell, culturecourt.com

“The writing is extremely good … an exquisitely crafted novel. Reminiscent of The Unbearable Lightness of Being.” – Aaron C. Brown, Amazon Top 500 Reviewer