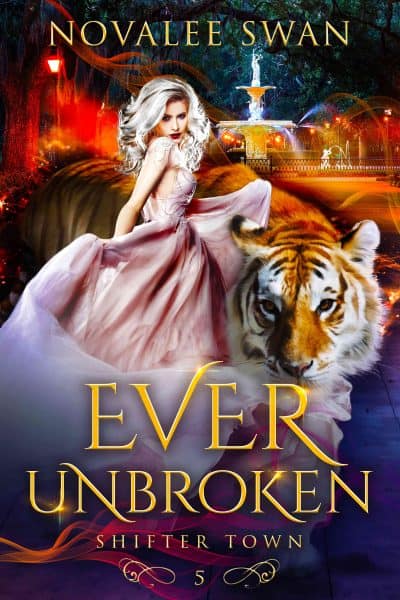 Amazon bestselling author Novalee Swan takes us back to the captivating world of Shifter Town in Ever Unbroken, the story of a woman trapped behind her own shields and a man who sees everything.

They call her the masterpiece.

Sabine Rembrandt is used to being an object of desire. As a former supermodel and a purebred Arabian Gray shifter, she’s had the world’s most powerful men at her feet. But none of them ever saw the real woman. The one behind the stunning face and exquisite form. They only ever saw a wild thing they wanted to break. She refused to be dominated by anyone and left that false, glittering world behind. Even though it cost her everything.

Renkin Jones is a black-haired, green-eyed Siberian tiger from backwater Louisiana who speaks Cajun French like it’s the mother tongue. He is also a man who can see below the surface. Intrigued by the mystery of Sabine, a woman with shields he wants to penetrate and walls he wants to tear down, he’s determined to unravel her.

Sabine is equally determined to ignore the tiger prowling around, even if she is tempted by all that raw power and quiet strength, and the words he whispers in the night. But when a predator emerges intent on claiming Sabine, it unleashes the tiger’s fury. That’s when she learns sometimes shields fail and walls crumble, that the one man intent on protecting her is the one man who might break her, and that when a tiger has you in his sights . . . all you can do is surrender.

Ever Unbroken is the fifth book in Novalee Swan’s Shifter Town series. It features her trademark heat and emotional intensity and is perfect for readers who love sexy shifter romance and small-town charm.