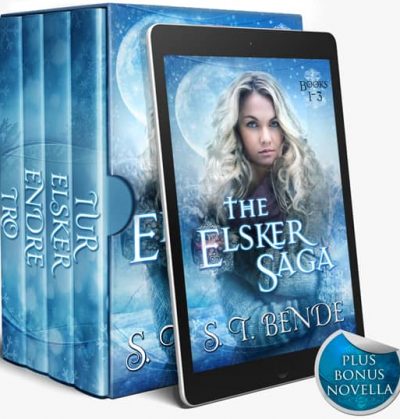 When student Kristia Tostenson discovers her new boyfriend is the Norse God of Winter, her orderly life becomes very messy. With Ragnarok on the horizon and a lunatic haunting her dreams, Kristia must find a way to save the realms . . . even if it ends up costing her life.

Kristia Tostenson prefers Earl Grey to Grey Goose and book clubs to nightclubs. But when she transfers from her one-stoplight Oregon town to Cardiff University in Wales, she falls in love with Ull Myhr. Her new boyfriend isn’t exactly what she was expecting. Ull is an honest-to-goodness Norse god—an immortal assassin fated to die at Ragnarok, the battle destined to destroy Asgard and Earth. On top of being marked for death, Asgardian law prohibits Ull from tying his fate to a mortal. No matter what she feels for Ull, Kristia knows she’s the one thing he can never have.

With Ragnarok on the horizon and a lunatic haunting her dreams, Kristia has to find a way to convince Ull that breaking the rules is the only way to survive, that defying the order he’s sworn to uphold is their only chance to be together. And when someone starts asking the wrong questions, Kristia realizes the crazy visions she’s had all her life might be the key to saving their realms . . . even if they end up costing her her life.

Sometimes, finding your destiny means doing the exact opposite of what The Fates have planned. Winning the heart of an immortal assassin was a dream come true for Kristia Tostenson. Now she’s caught in a whirlwind of wedding plans, goddess lessons, and stolen kisses with her fiancé. But her decision to become immortal could end in heartbreak—not only for Kristia, but also for the god who loves her. While Ull would do anything to protect his bride, even the God of Winter is powerless against the Norse apocalypse.

Ragnarok is coming. And the gods aren’t even close to ready.

Sometimes you just have to believe. Finding her destiny nearly cost her everything. Kristia knows she can handle whatever The Fates throw at her next—including her long-awaited honeymoon with the God of Winter. But as things heat up between Kristia and Ull, a frost settles over Asgard. An unexpected death marks the beginning of the end, much earlier than anyone expected. Kristia’s barely begun to understand what she’s capable of, and controlling her powers seems completely out of her grasp. With her new family fighting for their lives, and Ull fighting for their future, Kristia has to make a devastating choice: preserve the life she loves, or protect the god she can’t live without?

Inga Andersson is the envy of every girl in Asgard. On the surface she has it all—great friends, a job as Odin’s personal fight choreographer, and a happy ever after with her realm’s hottest assassin. But when evil invades Asgard, her perfect world comes crashing down. Someone is planning to kill off the gods, and Inga’s best friend Ull is first on their list. With the Norse apocalypse a nanosecond away, Inga has to decide how she’ll spend her final moments of freedom. Because from the moment this battle begins, Inga’s happily ever after will be nothing more than a memory.

Some things are worth fighting for.