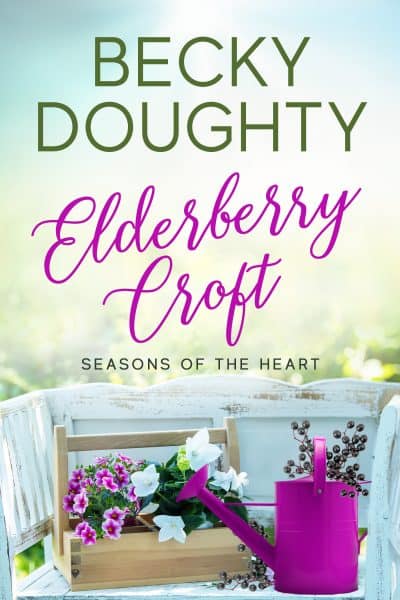 The Coach House Trailer Park is the last stop for most of its residents. But a new girl sweeps into the neighborhood, charming them all with her wild nature, her elderberry gifts, and her outrageous laughter. No one quite knows what to make of her . . .

The Coach House Trailer Park is the last stop for most of its residents. But a new girl sweeps into the neighborhood, charming them all with her wild nature, her elderberry gifts, and her outrageous laughter. What brings the mysterious Willow Goodhope to this dead-end place? From what—or whom—is she hiding?

ELDERBERRY CROFT is the tale of one woman’s journey toward hope and healing, and the people whose lives she transforms along the way. If you like Sarah Allen Addison, you’ll love Elderberry Croft.

JANUARY BREEZE: There’s a new girl in town, and she’s breathing life into The Coach House, starting with the tiny cottage she christens Elderberry Croft. Kathy isn’t so sure about this wild child living across the way, with her generosity and exuberance for life. What is Willow Goodhope doing in a place like The Coach House?

FEBRUARY EMBERS: Richard and Patti Davis’ days stretch out endlessly before them, but lately, Richard has taken notice of the new neighbor in Space #12. Will Patti lose the only man she’s ever loved to the green-eyed earth girl? Or will Willow steal both their hearts?

MARCH WHISPERS: Joe Sanderson believes that living simply is simply better living. He gardens, he cooks, he entertains Vivian. Everything is going just fine . . . then along comes Ms. Willow, with her whispering shadows and her elderberry pie, reminding him of what it means to be a man.

APRIL SHADOWS: The Cat Lady rarely sets foot outside her trailer during the light of day. But one morning, Willow shows up at her door, knocking her perfectly-ordered world off its axis. And when the stillness is further interrupted by the Shadowman, Shelly must confront her past in order to embrace her future.

MAY ENCHANTMENT: Managing the Coach House keeps Eddie busy, if not exactly fulfilled. But the new girl in Space #12 is stirring up the neighborhood. Willow’s making waves, and Eddie’s a little swept off his feet. When he comes face to face with the Shadowman in the middle of the night, Eddie questions everything he thought he knew about himself.

JUNE MELODY: Myra believes her doctor when he says she’s going to die, but when she encounters a rattlesnake, she realizes that maybe she needs to start living again, rather than spending her last years waiting to die.

JULY MADNESS: Donny Banks is trouble with a big T. Edith keeps hoping if she helps her baby out one more time, he’ll get his head on straight. But big brother Eddie has had enough. This time, Donny’s knocking on the wrong door—Willow Goodhope’s—and Eddie’s having none of it.

AUGUST MEMORIES: Al’s job keeps him busy during the day and his Bud keeps him company at night. But Al is a prisoner of his past, and when one phone call changes his future, Al must choose to do the right thing. And Willow Goodhope may just hold the key that will set him free.

SEPTEMBER LONGING: Prudence loves animal prints, big hair, and scarlet nails. She also loves her man, Carney, but is beginning to wonder if he feels the same about her. When Willow Goodhope shows up needing a friend, Prudence gets the chance to reevaluate what’s important when it comes to matters of the heart.

OCTOBER MOURNING: The baby growing in Andrea’s womb is a miracle, and she marvels at the way she’s changing from the inside out. But when faced with the knowledge that she can no longer manage on her own, will her pride allow her to receive help from Willow?

NOVEMBER AWAKENING: A Vietnam vet, Doc suffers from severe post-traumatic stress, debilitating episodes that send him back to the bottle time and time again. When he discovers Willow on the verge of giving in to her own despair, he finds unexpected solace in stepping outside his own comfort zone to comfort her.

DECEMBER DAWNING: It’s been almost a year since Willow moved into Elderberry Croft, and she can no longer ignore the shadows that drove her here. Is there hope for happily ever after?