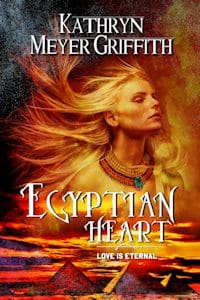 A lonely woman Egyptologist uncovers a lost tomb and is hurled back to 1340 B.C. by a cursed amulet to a time filled with dangers–and to find,transform and help her eternal love. Will the amulet’s magic allow her to remain with him or will it return her to her own time?

Maggie Owen is a beautiful, spirited Egyptologist . . . but lonely. Even being in Egypt on a grant from the college she teaches at to search for an undiscovered necropolis she’s certain lies below the sands beyond the pyramids of Gizah doesn’t give her the happiness she’d hoped it would. There has always been and is something missing. Love.

Then her workmen uncover Ramose Nakh-Min’s ancient tomb and an amulet from his sarcophagus hurls her back to 1340 B.C–where she falls hopelessly in love with the man she was destined to be with, noble Ramose, who faithfully serves the heretic Pharaoh Akhenaton and his queen Nefertiti.

She’s fallen into perilous times with civil war threatening Egypt. She’s been mistaken for one of Ramose’s runaway slaves and with her blond hair, jinn green eyes and fair skin she doesn’t fit in. Some say she’s magical and evil. Ramose’s favorite, Makere, attempts to kill her.

The people, angry the pharaoh Akhenaton has set his queen Nefertiti aside and he’s forced them to worship his god, Aton (instead of their many Egyptian gods), are rising up against him.
Maggie’s caught in the middle of it in a dangerous land and time she doesn’t belong in.

In the end, desperately in love with Ramose, will she find a way to stay alive and with him in ancient Egypt–and to make a difference in his world and history?
Because Maggie has finally found love.