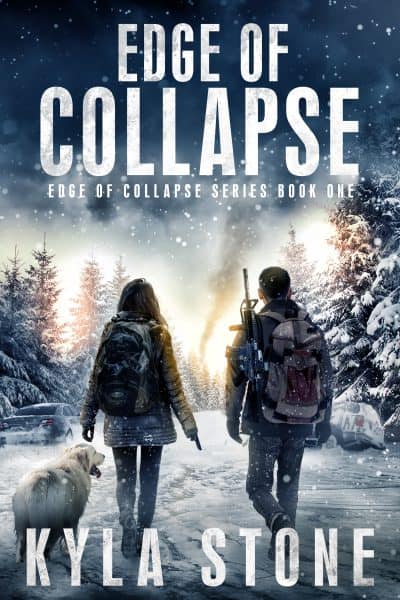 When an EMP devastates the U.S. power grid, a kidnapped girl and a reclusive ex-soldier must trust each other to survive.

During the coldest winter on record, an EMP destroys the nation’s power grid.

No electricity. No cars or phones. The country is plunged into instant chaos.

But for Hannah Sheridan, it’s the best day of her life. For the last five years, she’s been the captive of a sadistic psychopath—until the EMP releases the lock of her prison.

Battered but not broken, she emerges from her underground cell into a hostile winter landscape with nothing but the clothes on her back and her own determination to survive.

Reclusive ex-soldier Liam Cunningham is headed nowhere fast. He believed he was prepared for any disaster, until the EMP took everything he’d ever cared about in a matter of seconds.

Two hundred frozen, perilous miles stand between them and their destination in rural Michigan. But the killing cold isn’t the only threat, for Hannah’s captor isn’t about to let her go . . .

When the country goes dark, ordinary people find themselves facing the end of the world as they know it. With society collapsing before their eyes, they’ll have to risk everything to protect their home and the people they love.