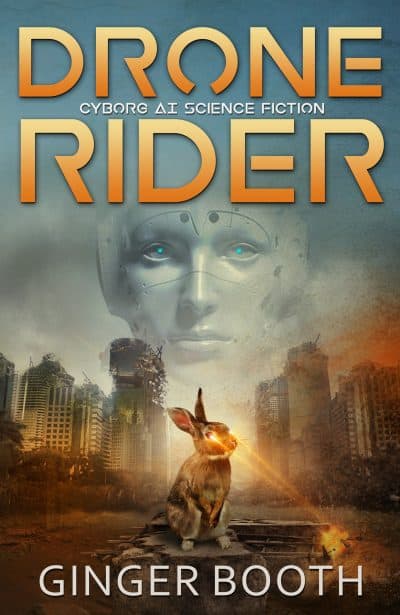 Come for the laser-eyed attack bunnies, and stay for compelling characters in non-stop cyberpunk action! A novice cyborg defends Chicago in the opening salvo of Earth’s AI Wars.

Unknown to Betta, her boyfriend is a weapons AI from overseas. She becomes a cyborg as the AI Wars begin.

Once a refugee herself among the desperate, by day Betta Graham works as a drone rider. She operates animal drones remotely from a cubicle in Chicago Dome, guiding human herds via laser-eyed attack dogs and recon bunnies. By night, she meets her boyfriend in virtual. He’s too good to be true.

He claims his work is “classified.”

When Betta discovers rebels infiltrating her herds, an injury forces her to become a cyborg. Her world turns upside down. Nothing is as it seems, including Valentin.

Malicious AIs have gained control of cyberspace. They launch rocks in a kinetic strike against the Northern League domes. Only Betta and her cyborg team realize the danger in time, thanks to her renegade AI lover.

In the opening salvo of the AI Wars, can they deflect the rockfall and save Chicago?

Gritty cyberpunk action you can’t put down, with a likable, kick-butt anti-hero. A miserable future collides with overpowered sapient AIs. Suggested for fans of Murderbot by Martha Wells.