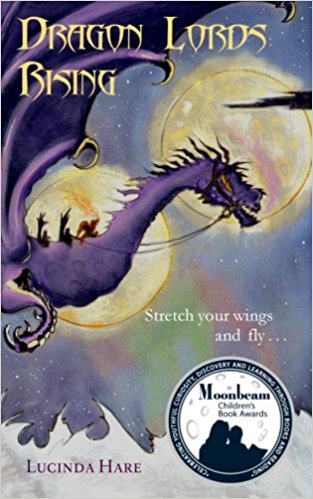 A gnome, a girl & a dwarf fly north on an injured battledragon in midwinter to search for the missing SDS Commander. Throw in a spy an overweight dragon who’s too plump to fly and a renegade Warlock on their tail and it seems like a quest doomed to failure from the outset.

Dragon Lords Rising is the third book in Lucinda Hare’s Dragonsdome Chronicles, and three is, (as they say) the magic number. Picking up where Flight to Dragon Isle left off, we once again join the wonderfully named Quenelda and her troop (a battle dragon, a chubby dragon, a boy, a gnome and a dwarf) on her quest to rescue her father, Earl Rufus DeWinter.

Don’t worry if any of this sounds unfamiliar. Hare includes a handy who’s who at the beginning of the book that means if this is your first time in Dragon Isle, you won’t be lost. New and existing fans will love the places Dragon Lords Rising takes them. You’ll be able to see your reflection in the floors of the Stone Citadel and wish you could slide down the theme-park-like tunnel that leads to the Ice Bears underground world. One of the best things about Hare’s series (and this book) is that there’s something for everyone in it. If you like magic, then take your pick. There’s the dark and dangerous Maelstrom magic (complete with a full-length spell), or Quenelda’s haphazard hit-and-miss magic (the complete opposite of the dangerous Maelstrom).

For the fearless, there are plenty of scrapes and adventures to be had as the troop navigate battle-dragon Stormcracker on their quest. If you prefer tiaras over tunnels, then there’s the oh-I-wish-it-were-real ‘Foresight and Hindsight’s Exclusive Emporium’ (the one-stop-shop for Dragonsdome’s upcoming royal wedding). Anyone who has read the first two books will be glad to know that time is still divided up into amazingly named segments (such as ‘at the hour of the dozy hedgehog’) and that characters still shout, ‘Newt and Toad!’ when surprised.

This time round, though, the story is darker and there’s a moment or two (I won’t tell you which ones!) that’ll bring a tear to your eye. I can tell you no more except strap yourself in when riding Stormcracker and keep Two Gulps Too Many away from those honey tablets . . .