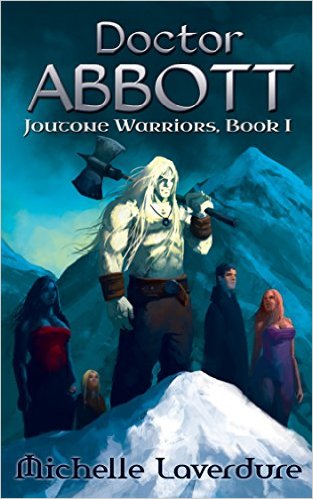 A doctor is shipwrecked and forgotten on an undiscovered island in the North Atlantic. He’s enslaved by an ancient warrior race for his healing powers. His only hope for survival is the one warrior who wants him dead.

Doctor Benjamin Abbott started his career as a surgeon, working in all parts of the world with one goal . . . to bring medicine to people who would never see it otherwise. With a brilliant mind and determined drive, he quickly found himself working for pharmaceutical companies, research labs and governments across the globe. He thought he was prepared for any place his career could take him. He could never be more wrong about that . . .

Ben’s last mission left him freezing and alone on a desolate island in the North Atlantic, or so he thought until he was captured and at the mercy of an entire warrior race. An undiscovered breed of humanoids with a thirst for battle and no regard for human life.

He is quickly duped into marrying a woman who had become infatuated with him, and soon learns the price of such a mistake. The only way to keep himself and her alive is to use his healing powers to barter not just for his freedom but for his protection.

As word spreads of his skills, he finds he is little more than a trophy and commodity to the Joutone, kidnapped, bartered for, traded, fought over, but never to return home. Ben’s only hope for survival becomes the one beast who seems to want nothing more than to see him dead.

It is at his mercy that he learns there is no hope of ever seeing home again, and that the rest of his life will be a struggle for survival.