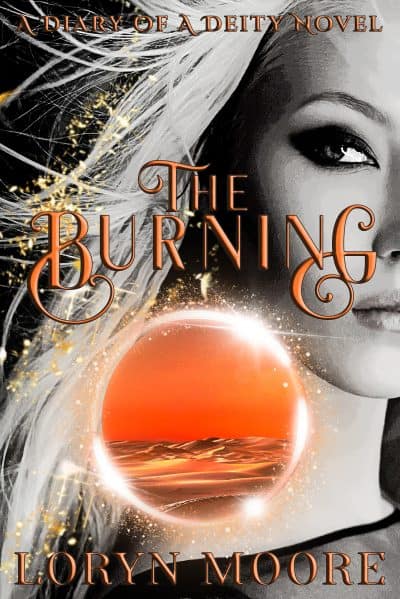 The Burning (Diary of a Deity Book 1)

I’m destined to save them, but they’re my family’s greatest enemy; they’re evil . . . and so is he. Or were we wrong all along?

My name is Bekka and my life used to be simple. Sure, I was a goddess and a princess, but I had that figured out. Or at least I did until I came into my powers, and Arrick, the dangerously sexy heir of my family’s greatest enemy, kidnapped me.

Things got complicated after that—Arrick’s home realm of Moldize faced imminent destruction and my newfound powers were destined to save them.

But how could I trust them?

Exiled from the peaceful Twelve Realms over 900 years ago, Moldize was filled with malevolent deities and villainous men. Forced into this brutal world, I felt conflicted. On the one hand, I wanted to stand against my family’s enemy, but on the other, I felt drawn to my destiny like a moth to a flame.

I needed to decide my next move quickly because time was running out.

My powerful grandfather was searching for me, and I knew that once he caught up with the gods who kidnapped me, there would be no stopping his thirst for vengeance.

That left me with a crucial question: Could I save them all before he found me?

And even more important: Did I want to?