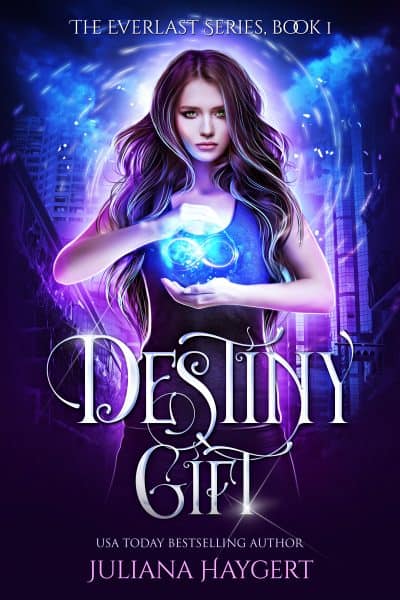 Her gift will bring light to a world of darkness . . . In 2047, the world exists in permanent darkness. Nadine works hard to better her family’s life. When she starts having visions of a boy named Victor, she tries to ignore them—until she bumps into a very real Victor.

Her gift will bring light to a world of darkness . . .

In 2047, the world exists in permanent darkness. Nineteen-year-old Nadine, a student at NYU, works hard to better her family’s life in the harsh conditions. When she starts having strange visions of someone named Victor, she tries to ignore the flashes, afraid she might be going insane.

But when she bumps into a very real Victor, her entire world shifts. Her visions taking a turn for the worse, Nadine is bombarded with prophecies of eerie fates, unfamiliar gods, sharp-clawed demons . . . and instructions. Along with the reluctant Victor, she finds her path entwined with yet another man, Micah, who may be able to shed light on her dark revelations.

Directed down an unbelievable path of magic and mayhem, the three must unravel clues from the visions in order to restore an ancient creed. The chance to bring sunlight to the world again is in Nadine’s gift, but only if the evil forces behind the darkness don’t manage to stop her first.