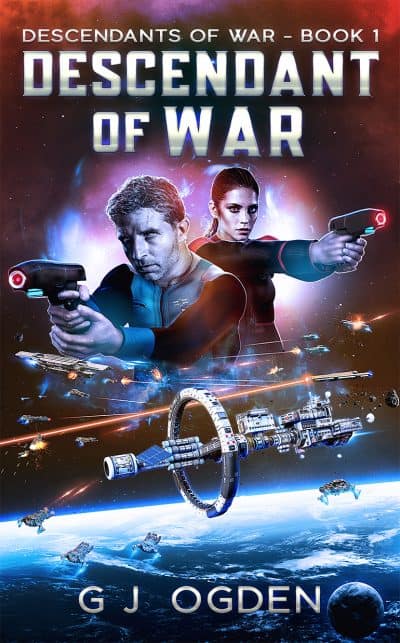 Descendant of War is a sci-fi action-adventure set in a vivid, multi-species universe. It’s filled with danger, intrigue, and drama set against the backdrop of a looming war versus an ancient enemy. If you like Babylon 5 & DS 9, this is the book you’ve been waiting for.

The descendant of history’s most infamous soldiers will inherit his ancestor’s war.

Frustrated by restrictive rules, maverick warship commander Dalton Reeves has crossed the line one time too many. Disciplined for violating orders, Reeves is packed off to “The Abyss”—a dangerous and isolated space city named Concord Station, and officially the worst assignment in the galaxy.

Built to foster diplomacy between the six galactic realms, Concord is now nothing but a debauched, corrupt hellhole infested by crime lords, degenerates, and outright failures. It’s also Commander Reeves’ last chance to do something significant with his life.

Amidst escalating interstellar tensions, a long-forgotten enemy emerges from the mysterious Shadow Space to threaten war. Events are quickly set in motion that will propel Concord Station from obscurity to the most strategically important outpost in the galaxy.

But as the secret of Reeves’s dark origin is revealed, he’s thrust into the center of the conflict in more ways than one. Dalton Reeves is a descendant of war, but he’s not the only one.

The ancient enemy not only seeks conquest, but to exact vengeance upon the sole descendant of two infamous soldiers that annihilated the alien’s homeworld a millennium ago.

With the six realms on the brink of all-out war, can Commander Reeves face both his demons and his bitter rivals to become the warrior and the leader the galaxy desperately needs him to be?