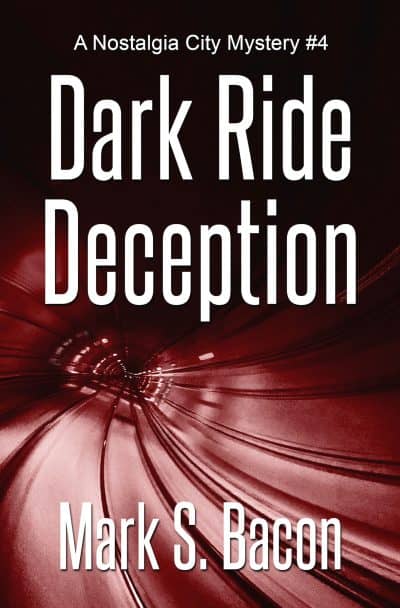 A computer genius is missing from Arizona’s Nostalgia City theme park. So are the secrets to his mind-bending technology. Is he dead? On the run? Ex-cop Lyle Deming goes undercover to scour Florida theme parks, looking for the scientist and his billion-dollar secrets.

The entire $22 billion US theme park industry is about to be eclipsed by mind-bending new technology at Nostalgia City. But the secret tech is missing. So is its creator. Is he dead? On the run? And what about the severed finger ex-cop Lyle Deming finds in his cab?

An FBI agent theorizes the People’s Republic of China is responsible for the disappearance. The Nostalgia City theme park CEO, however, is convinced a rival theme park is behind the theft. He drafts Lyle, now driving a taxi for the park, to fly to Florida and investigate other parks.

He goes undercover with a variety of fake identities—from attorney to maintenance worker—to snoop behind the scenes and ultimately get himself in serious trouble.

Back in Nostalgia City, park executive and former college basketball star, Kate Sorensen, investigates the death of an actor in a Vietnam-era crime movie being filmed at the park. Nostalgia City is a meticulous re-creation of a 1970s small town. Kate is forced to confront Cory “Psycho” Sievers, a mentally unstable actor fresh out of rehab. But she may have to set the case aside—Lyle’s in trouble.

Kate and Lyle race the clock to find murderers, recover tech secrets, and escape deadly threats to them and the future of Nostalgia City.

“Mark S. Bacon’s well-told mystery is clever, smooth, and intriguing, with a reluctant detective who has just the right touch of self-deprecating humor. The author’s wry wit and engaging voice will keep you turning the pages of Dark Ride Deception until the very last satisfying twist.” —Mary Alder, author of the Oliver Wright WWII mystery series

Recommended: Death in Nostalgia City, the first book in this series, was recommended for book clubs by the American Library Association.