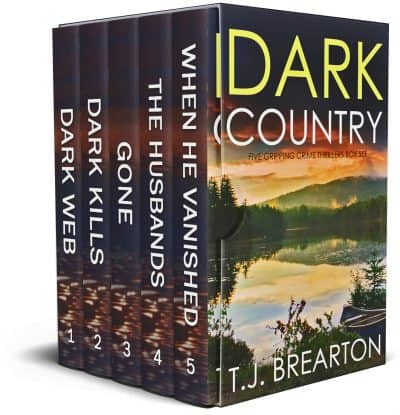 Discover a collection of five heart-pounding crime thrillers by bestselling author T.J. Brearton! In this five-book box set you’ll get a selection of great thrillers with fantastic emotional character development.

Discover a collection of five heart-pounding crime thrillers by bestselling author T.J. Brearton! In this five-book box set you’ll get a selection of great thrillers with fantastic emotional character development. Don’t miss out on this acclaimed series of unputdownable crime thrillers with twists you won’t see coming, keeping you gripped right till the end.

Rugged mountains. Cold winters. Danger hidden among the small towns. The North County is a remote, naturally beautiful region of New York State which features many lakes, rivers, and mountains. It’s home to some of the richest and poorest people in the state. Hard-working families struggle through brutally cold winters and the affluent build second houses by the pristine lakes. But what dark secrets lurk beneath the icy beauty?

Dark Web
Who killed a teenager and left the body in the snow? Mike and Callie Simpkins moved north to restart their lives and get their finances back on track. But their son Braxton withdraws into a dark online world. When he decides to meet some of the players in the real world, tragedy strikes, and the family is torn apart.

Dark Kills
A killer targets female college students. Only Detective Dana Gates can stop them. Despite her questionable past, she’s a dedicated, by-the-book investigator. But with a serial killer tearing through campus, everything she knows is about to change.

Gone
How can an entire family disappear into thin air? Where have the Hutchinsons and their kids gone? An abandoned teddy, a half-drunk glass of wine and a missing PC are the only clues. Detective Rondeau doesn’t think they left by choice. What are their abductors trying to hide?

The Husbands
He kills their wives. Then he comes after the husbands. “Do you want to know who killed your wife?” he asks. Kelly Roth, FBI profiler, returns home to Syracuse to stop a sadistic serial killer. But how far will she go to uncover the truth?

When He Vanished
Jane Gable comes home to find her husband gone. His abandoned car is found and the police draw their own conclusions. Suspicion falls on Jane. Desperate, she begins investigating on her own. Is she being framed? Can she even trust herself? How far will she go to save her family?