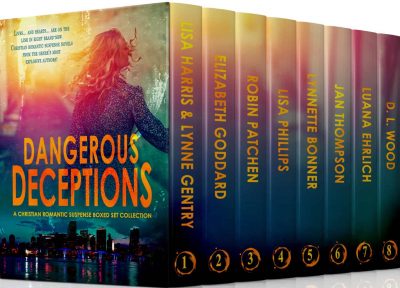 Lives and hearts are on the line in 8 new Christian Romantic Suspense novels from 9 critically-acclaimed authors (USA Today Bestseller, Christy and Carol Award winners and finalists). If you love suspense wrapped in romance that you can’t put down, don’t miss this boxed set.

Lives . . . and hearts . . . are on the line in eight brand-new, Christian, romantic suspense novels from the genre’s most explosive authors.

Lethal Outbreak by Lisa Harris & Lynne Gentry
Virus hunter Aiden Ballinger believes the source of the lethal outbreak that decimated a remote Tibetan village came from disturbing the permafrost. Desperate to rebury it before it buries the world, Aiden enlists Rachel Allen, a beautiful epidemiologist. But while Aiden and Rachel pursue the cure—and their feelings for each other—someone is hunting them. Whoever wants them dead will not stop until they are silenced.

Collision Course by Elizabeth Goddard
His cover blown, FBI Special Agent Reg Jacobson finds refuge on the other side of the country, but trouble follows him when he faces off with a woman from his past. Private Investigator Nicole Weatherly, hired to catch a thief, suspects Reg. When the bullets fly, Reg and Nicole must escape secrets from their pasts before their futures collide.

Glimmer in the Darkness by Robin Patchen
When Cassidy learns another child has been kidnapped from her hometown, she’s convinced the man who took the girl she’d been babysitting seven years earlier is behind the recent abductions. She alone holds the key to finding him. Though James blames Cassidy for his sister’s death, he’ll help if there’s a chance to save a child’s life. Can Cassidy and James identify the serial killer in time to rescue his latest victim?

Expired Plot by Lisa Phillips
A man after justice. A local crime boss. The woman caught between. Undercover FBI agent Will Briar is working his way to the top of an illegal operation. But when he discovers the identity of the boss, everything changes. Hollis knows nothing is as it seems. Now she must either save her father and doom herself, or take a chance on the man who could be the answer . . . to everything.

Ice by Lynnette Bonner
Camryn Hunt witnessed a murder. Now she’s under the protection of handsome small-town sheriff Holden Parker. The gorgeous island location, and break from her dreary life, might be pleasant if the sheriff wasn’t so demanding. Determined that no harm come to Camryn, Holden secludes her at his home. He only wishes she didn’t intrigue him so thoroughly. Attraction only complicates things. Especially when the murderers arrive at his door. It’s going to take all his wits to save her.

Never A Traitor by Jan Thompson
The last thing Private Investigator Earl Young expects is to pose as a fake boyfriend to a whistleblower. His driving need to solve problems forces him to work with paranoid Sienna Halstead as she draws him deeper into her corporate world of secrets and subterfuge. The more time they spend together, the more attraction grows. When another whistleblower is murdered, Sienna knows she’s next. How far will Earl go to protect her?

Ben in Love by Luana Ehrlich
Is CIA operative Ben Mitchell really in love with the daughter of a Turkish dissident? Titus Ray, his mentor, isn’t buying it; he thinks Ben needs intel on a Muslim cleric. But when Titus follows Ben to northern Virginia, he discovers Ben’s deception is more dangerous than he thought. With their lives on the line, can Titus convince Ben to abandon his plans before it’s too late?

Liar Like Her by D.L. Wood
When disbarred attorney Quinn Bello discovers a body that inexplicably vanishes, no one in her seaside town believes her—no one, that is, except newcomer Ian Wolfe, who for his own mysterious reasons doesn’t hold Quinn’s past against her. Together they search for the truth, but doubts about Quinn’s sanity and innocence increase as the danger escalates. Will they expose the heart of the deception before Quinn becomes the next victim?