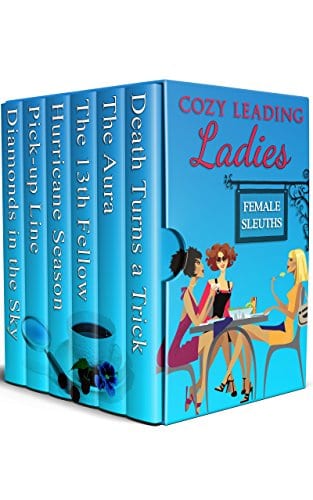 (1) Mild+
(1) Moderate+
Click or tap each bar for details
Log in to submit or change your own rating.

A yummy anthology containing FIVE top-rated cozy mysteries, each featuring smart and savvy ladies—who aren’t afraid to kick some butt. PLUS a romantic puzzler bonus, which isn’t at all what you might expect . . .

From murder at a conference in fashionable Provence to an underground feminist bordello in San Francisco (with a pit stop on the Gulf Cost where a killer’s on the loose while a hurricane closes in), Cozy Leading Ladies is sure to satisfy mystery readers who love their independent female sleuths. (Friendly piece of advice: it’s probably best to read the collection with a box of chocolates or your favorite brand of potato chips really nearby).

Death Turns a Trick by Julie Smith
A rollicking tale of murder, romance, and a bordello . . .

Rebecca Schwartz, nice Jewish lawyer with a few too many fantasies, is happily playing the piano in a whorehouse when she suddenly finds herself assigned to make sure a near-naked state senator escapes a police raid. That dirty job done, a lovely evening turns even more delightful when she’s picked up by the cops and spends the next two hours at the Hall of Justice. Could this day get any worse? Of course! Guess who arrives home to find a dead hooker on her living room floor?

The Aura by Carrie Bedford
Life spins out of control for London architect Kate Benedict when she sees a dancing aura above certain people’s heads that seems to signal death. Suddenly she’s psychic. But that can’t be! Psychic’s not acceptable in her circle, where the supernatural is strictly for the superstitious. And yet . . . people are dying. People close to her.

American Professor Havilah Gaie has always seen herself as “an academic version of Pam Grier’s characters: smart, quick on their feet, loyal with a keen sense of purpose.” Now she’s got a chance to suit up for action because suddenly she’s a witness in a murder.

The 1950s fairly leap off the page in this classic cozy mystery set in northern Florida in the Eisenhower era, complete with Johnny Ray on the jukebox and a Womanless Wedding—this one interrupted by an explosion at a moonshine still. Lily Trulock, owner of Trulock’s Grocery & Marine Supply, leads a pretty quiet life until a stranger comes to town. Before she can say, “down the hatch,” Lily’s at the center of a vicious murder and a no-holds-barred bootlegging war—and a nasty storm’s on the way.

Pick-up Line by Patty Friedmann
Romance is the best pain-killer . . .

Cupid’s working overtime in the unlikely venue of N.O. Drugs, where plus-sized beauty Ciana Jambon works with dread-locked pharmacy student Lennon Israel, and she’s got the crush of the century. Unbeknownst to her, Lennon’s carrying his own torch, but family problems distract both of them until tragedy leaves Ciana reeling. Lennon wonders if there’s a murderer in her clan, and he’s pretty sure he’s the only one who can help.

BONUS! Diamonds in the Sky by M.A. Harper