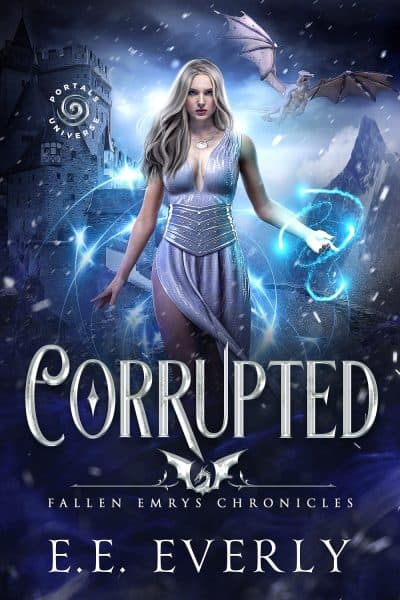 An immortal dragon guardian, a portal to a new world, and the corrupted mortals who fawn all over her.

As a warrior stuck in a peaceful world of mock tournaments, preparing for a battle that will never come, Niawen feels like a pawn. Waiting. Overly still. Unrest pushes her toward the unknown, to the mortal world beyond the portal—a place she is told is full of corruption, full of humans who would defile her inner light.

Despite the warnings, Niawen enters the mortal realms to escape a broken heart with her fearless dragon. The mundane, and supposedly evil, humans hold a fascination she couldn’t have anticipated. What’s more, they’re all captivated by her and her powers.

What Niawen fails to understand is that her growing affections for those in her new life could all be sabotaged by death. They are, after all, mortals. What’s more, she has no idea what real war is, or does, especially to the light of those who engage in it.

Corrupted is the first novel in the Fallen Emrys Chronicles, an epic romantic fantasy series. If you like a heroine who rebels against the norm, several charming princes and a dashing fur trader vying for her attentions, and an adventure in a new world, then you’ll love this book by E.E. Everly.