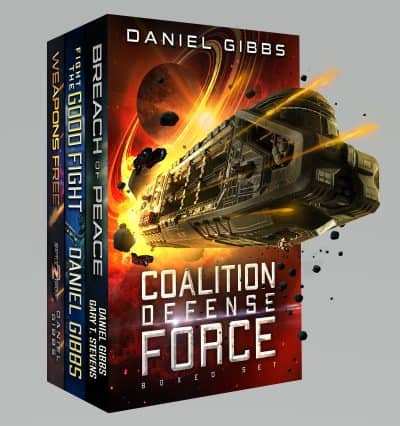 The brave men and women of the Coalition Defense Force are the only line of defense against a merciless enemy when peace in the Sagittarius Arm is destroyed with a vicious sneak attack. Experience three unique perspectives in this three volume boxed set, with over 730 reviews!

The brave men and women of the Coalition Defense Force are the only line of defense against a merciless enemy when peace in the Sagittarius Arm is destroyed with a vicious sneak attack. Experience three unique perspectives in an ongoing galactic fight for survival in this first-in-series boxed set.

Reservist Fighter Pilot Lieutenant Justin Spencer never expected a live-action battle during his annual two-week tour with the CDF. But when the communist League of Sol arrives on the scene with overwhelming force, illusions of returning home are shattered with one shot across Justin’s cockpit. Now it’s full-on engagement or permanent elimination in Weapons Free, book one in the Battlegroup Z series.

As war rages on in the first installment of the Echoes of War series, the CDF’s struggle for the cause of freedom continues in Fight the Good Fight. Colonel David Cohen sacrifices dreams of becoming a rabbi when his courage under fire brings quick promotion—and nightmares filled with condemnation for those he couldn’t save. David must face the enemy within and square the tenets of his faith with his responsibility to crew and country, or see billions enslaved by a ruthless regime.

While most in the CDF are in it defend their homes, some merely seek their own enrichment. Merchant ship captain James Henry learned that hard lesson years before, surrendering to dishonorable dismissal from the CDF to protect his fellow officers from a treacherous superior. In Breach of Peace, Jim is once again caught between opposing factions as merchant vessels go missing in neutral space and he’s called upon to hunt down the only survivor. But this time he knows how to play the game in book one of the Breach of Faith series.

“Well written, well plotted and populated with characters that jump off the page. Deserves to become a classic of the genre.”

“First book I’ve read from Daniel Gibbs, loved the equality of religions and the fleet action. Reminded me of Battlestar Galactica. Characters are likeable and the story flows smoothly. Really liked the story and totally entertaining.”