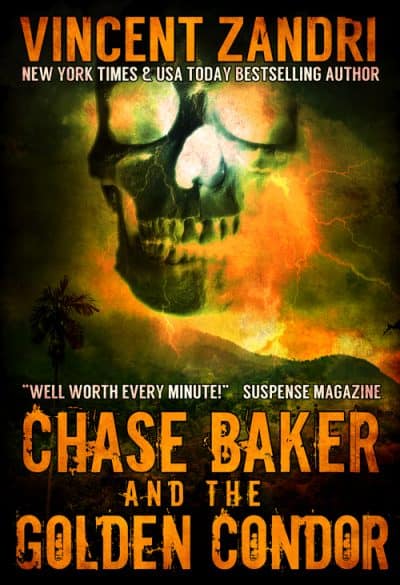 “AN ANCIENT AIRCRAFT MADE OF GOLD SAID TO BE THOUSANDS OF YEARS OLD…THE UNRELENTING AMAZON JUNGLE…A BEAUTIFUL ,SEXY LITERARY AGENT…DANGER AND ROMANCE COME TOGETHER IN THE LATEST CHASE BAKER ADVENTURE!”

Seeking a much needed payoff, Chase Baker stumbles into the opportunity of a lifetime: to use his treasure hunting skills to seek out an aircraft hidden deep in a remote part of the Amazon Jungle. But the aircraft in question isn’t any old airplane. Legend claims it’s an ancient flying machine called the Golden Condor—an intergalactic spaceship delivered to the Incas by aliens more than a thousand years ago.

There’s a catch, of course. Hostile tribal natives, in collaboration with a band of Tupac Amaru revolutionary terrorists, will stop at nothing to murder Chase, his team of explorers, and his beautiful literary agent, before they reach the Condor. And if the terrorists don’t kill them, then the writhing, creeping jungle almost certainly will.

But in typical Chase Baker style, once he sets his sights on the prize, nothing will stand in his way. They are embarking on a mission that, if it succeeds, will change the way historians view the ancient Inca civilization—and alter society’s beliefs about early man and the heavens above. From New York Times and USA Today bestselling Thriller Award winner, Vincent Zandri.