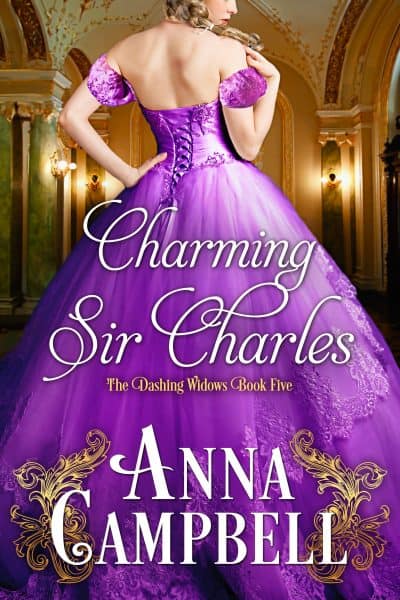 Sally, Lady Norwood, spent ten years married to an oaf. Now she plans to have fun. But first this Dashing Widow must launch her niece into society and find her a good husband. How disastrous when Sally realizes she's found Meg's perfect man—but she wants him for herself!

Sally Cowan, Countess of Norwood, spent ten miserable years married to an overbearing oaf. Now she’s free, she plans to have some fun. But before she kicks her heels up, this Dashing Widow sets out to launch her pretty, headstrong niece Meg into society and find her a good husband.

When rich and charming Sir Charles Kinglake gives every sign that he can’t get enough of Meg’s company, Sally is delighted to play chaperone at all their meetings. Charles is everything that’s desirable in a gentleman suitor. How disastrous, when over the course of the season’s most elegant house party, Sally realizes that desire is precisely the name of the game. She’s found her niece’s perfect match—but she wants him for herself!

There are none so blind as those who will not see . . .

From the moment Sir Charles Kinglake meets sparkling Lady Norwood, he’s smitten. He courts her as a gentleman should—dancing with her at every glittering ball, taking her to the theatre, escorting her around London. Because she’s acting as chaperone to her niece, that means most times, Meg accompanies them. The lack of privacy chafes a man consumed by desire, but Charles’s intentions are honorable, and he’s willing to work within the rules to win the wife he wants.

However when he discovers that his careful pursuit has convinced Sally he’s interested in Meg rather than her, he flings the rules out the window. When love is at stake, who cares about a little scandal? It’s time for charming Sir Charles to abandon the subtle approach and play the passionate lover, not the society suitor!

Now with everything at sixes and sevens, Sir Charles risks everything to show lovely Lady Norwood they make the perfect pair!