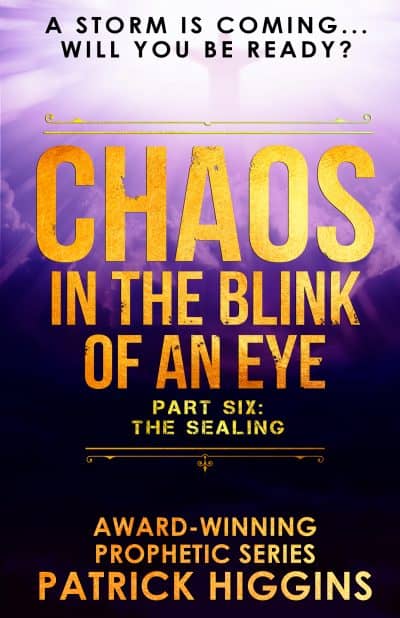 The Sealing (Chaos in the Blink of an Eye Book 6)

After what could only be described as a disastrous Universal Children’s Day celebration, when Muslims brutally attacked the Western Hemisphere, more than 100,000,000 human beings were killed, 30,000,000 of them were American citizens.

After what could only be described as a disastrous Universal Children’s Day celebration, when Muslims brutally attacked the Western Hemisphere, more than 100,000,000 human beings were killed, 30,000,000 of them were American citizens.

In retaliation for their actions, Salvador Romanero ordered three Muslims killed for every life they took, and a thousand Muslims for every pregnant woman killed. Islamic mosques, universities, and religious training centers were set ablaze by fire. Anyone found inside those buildings were ordered outside then killed by firing squad.

Soon after the attack, Air Force One was blown out of the sky, as part of a coordinated attempt to strip President Jefferson Danforth of his power. Only the President wasn’t on board the plane with the First Lady, when an on board explosion brought the aircraft down in a field somewhere in Kansas—it was one of the President’s body doubles.

Now living in hiding, as Vice President Everett Ashford was about to be sworn in as the next Commander-in-Chief, Jefferson Danforth was doing all he could to fulfill the promise he made to supply the End Times Salvation Movement with all the resources they would need.

Without them, survival would be impossible . . .

But before Ashford could even take the oath to become America’s next President, a new wave of chaos rocked the nation, plunging much of the country into darkness. Soon after that, the situation took another tragic turn for the worse, leaving the new President immobilized, and rendering the United States, and Jefferson Danforth, completely powerless.

With America now ripe for the taking, Salvador Romanero’s goal of achieving a one world economical and religious system was one huge step closer to being realized. But for his ultimate goal to come to fruition, which was nothing short of global worship, those who would never submit to him needed to be wiped off the face of the earth.

With nearly a billion Muslims gone, it was time for Romanero to shift his focus onto born-again Christians. After them, the Jews would end up in his cross hairs . . .

But knowing the Most High God would soon place His seal on the foreheads of His 144,000 chosen servants, and send them out to evangelize the world for the One they were forbidden, as practicing Jews, from reading about all their lives—Yeshua HaMashiach—meant Romanero’s desire for global adoration would not come easy . . .