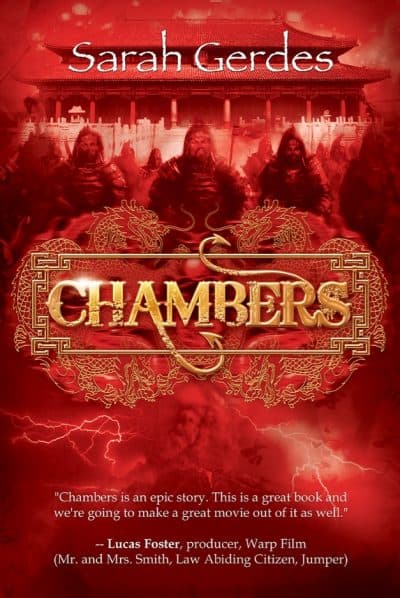 Cage and his sister seek their dad in ancient China, give life to ancient statues, and raise the dead, but they also bring forward evil. Historical fiction, time-travel, martial arts, and romance unite in this epic story of intrigue, ancient prophecies, and justice.

Historical fiction, martial arts, and romance unite in this epic story of intrigue, good and evil, and ancient prophecies and justice.

When George Fleener is mysteriously kidnapped, his teenage children Cage and Mia are left with nothing except a backpack full of his junk—an old-looking notebook, a broken flashlight, a cracked mirror, and a strange metal orb that quickly reveals itself as the key to a time-travel portal. Cage and Mia are transported from present-day Seattle to the Forbidden City of medieval China, where they are captured by the fourteen-year-old Ming emperor. Cage uses his wits and his years of martial arts training to prove their innocence, save the Emperor, and evade conspirators, and in the process, he learns the frightening truth about his family—he and Mia are part of a royal lineage that has been battling evil for a thousand years. For the young adults to survive the past and move forward through time, they must confront an invading army, command the dead, and bring sacred statues to life, all without altering history and changing the course of human events forever.

Chambers, the first installment of Sarah Gerdes’s five-book series, has a multi-million dollar budget and is now in preproduction, with Lucas Foster of Warp Entertainment producing.

“Sarah masterfully weaves the major and minor storylines with real, historical characters that literally changed the face of China alongside her unique, fascinating, and multi-dimensional, fictional characters," said Foster. "In this first installment, she takes the time necessary to establish the foundation for a saga. It's great book and we're going to make a great movie franchise out of it.” —Lucas Foster, Warp Entertainment, producer of films including Mr. and Mrs. Smith, Law Abiding Citizen, Bad Boys, Jumper, Man on Fire, and Crimson Tide.