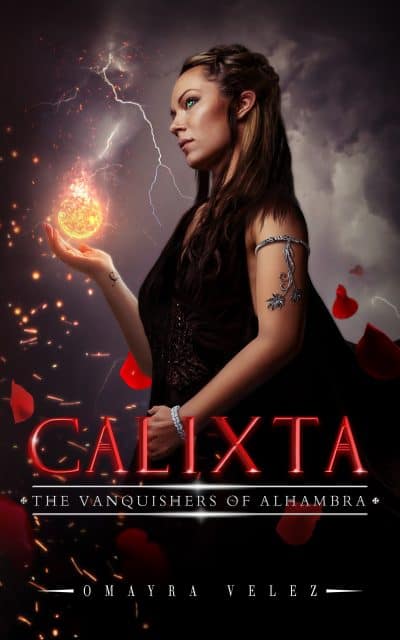 Calixta, The Vanquishers of Alhambra

Calixta, a well-educated prostitute, died, saving the lives of two innocent people. She woke at the antechamber to heaven, but there she met 20 of the most unlikely of beings who sent her back to the land of the living with some unique gifts and a task to protect mages.

She will never forget the first time she died, and neither will you.

Calixta’s life will never be the same when she returns from the dead after saving the life of her best friend and her unborn child. Her body was fast recuperating from a bullet shot to the chest. She had a faint memory of a Box Exchange Train Station in Heaven, but that had to be a dream. Or was it real?

Her life didn’t change much when evil came knocking at her bedroom window. A shadow named Jadro entered and killed her again.

Calixta had a destiny, a gift, a power, and a task. She was a Vanquisher of evil and a protector of mages from birth. She had to return and do her task in Alhambra. The times were dark, and Calixta had been hidden in darkness for all her 32 years of life. It was her time to shine.

“But you must stop selling your body. That will take you to darkness, ” said Lady Justice. And they sent her back with some exciting gifts this time.

In a society where your trade defined who you were for life. She had to fight her place in society and find friends to help her destroy Jadro, the demon that walked among men. And help her kingdom in a time of chaos.

Will Calixta stay alive long enough to fight all the demons Jadro send her way? Will Calixta find friends that will help her become the legendary Vanquishers? Will darkness cover the land before Calixta learns to use her magic?

This story is a fantasy that has horror as a side effect. It has an ounce of action, a smidgin of adventure, and a pinch of romance. It will make you angry; it might make you afraid of dark shadows and strange bald men. And Calixta will most likely make you cry.