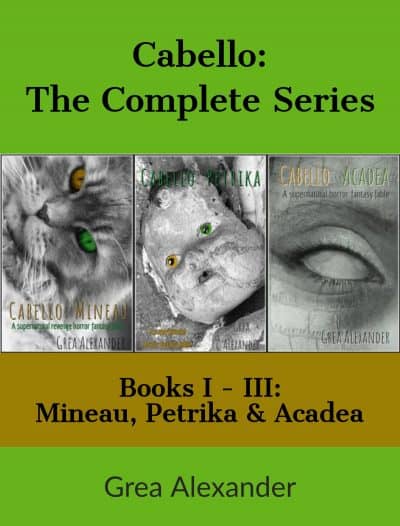 Nightmares are the stuff that answered prayers are made of.

When everyone involved in the cover up of Mineau December’s abuse and brutal assault begin to die under mysterious circumstances, Mineau believes her prayers are finally being answered. Answered prayers, however, quickly turn into a nightmare when Mineau finds that her savior is more dangerous than anyone she has ever known, than anything she could possibly dare imagine.

Some boughs are better off broken.

When a darkly compelling stranger enters Petrika’s life, she’s drawn into a deadly game of temptation.

Now, her womb filled with the unholy seed of her illicit union, will Petrika survive long enough to hold her baby in her arms? Or, will she be consumed by it instead?
—————-
Cabello: Acadea

With the Fallen Angel Uhzikiel reborn and one of the two Echoes who hold the majority of Acadea’s power under his spell, Acadea has no choice but to make her 3rd deal with yet another devil.

As Uhzikiel’s Echo begins to grow in power and ambition, can Acadea count on Cabello as she fights to regain that which is rightfully hers? Or, will Acadea find herself trapped between two devils instead?
————
“A horrifically twisted, fantastically campy tale of animalistic impulses.”