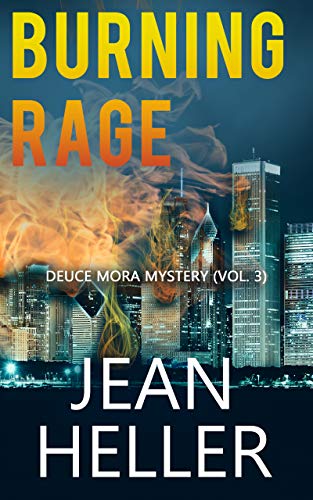 Whole blocks of Chicago real estate are falling to an arsonist, but no one knows why and everyone suspects the worst: terrorism. But journalist sleuth Deuce Mora’s detective-instincts say the pieces don’t fit—and no terrorist group has claimed the mayhem.

It’s already been a rough year for the Chicago Journal’s first-rate journalistic sleuth, Deuce Mora. After two agonizing investigations—one of which won her a Pulitzer Prize, the other of which forced her to kill a man—she claims she’s sworn off action-packed chases that cause nightmares. Still . . . from the moment she hears the earliest details of the first fire, her detective-instincts say the pieces don’t fit, and every other instinct tells the hard-hitting reporter she can’t walk away from the story, even though she knows she’ll regret it.

As a series of deadly fires destroys landmarks first, then occupied structures, the body count rises by scores and the city is gripped by terror at Christmastime, adding lost revenue to property damage in the hundreds of millions. Whole blocks of Chicago real estate are falling to an arsonist, but no one knows why and everyone suspects the worst: terrorism.

After the initial tip from the lead arson investigator (aka her boyfriend), Deuce is on her own to solve the mystery. Their relationship could endanger his reputation and his job if he’s even suspected of leaking information to her, so they’ve called a temporary halt. But she’s not exactly lacking for company—her old adversary, FBI agent Colter, has a tail on her, and Colter himself keeps popping out of the shadows. His presence at the crime scene and, even more revealingly, that of an NSA agent point to the suspicion of jihadist terrorism. But no terrorist group has claimed the mayhem.