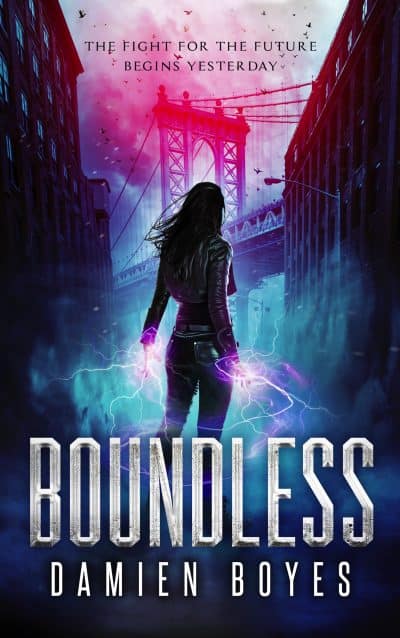 She lost everything she ever loved. Now she has to save the universe.

My name is Jasmin Parker, and I promise you, you won’t believe any of this, but that’s okay, I won’t hold it against you. I hardly believe it myself.

So yesterday I was just your average teenager, fed up with my overprotective parents and about to run away from home so I could finally feel what it was like to make a decision for once in my life. I was staring down the barrel of the next twenty years: graduation, community college, crappy job at the mall. Nothing exciting. Nothing stressful. And never more than half an hour away from Mom and Dad’s smothering embrace, forever and ever, Amen. I couldn’t take it.

And that’s when then soldiers from the future invaded—dropped straight out of rips in the sky—and I discovered I have superpowers.

I know, right? Bet you didn’t see that coming. I know I didn’t.

It wasn’t a coincidence either, my powers and the invasion. They came for me. Because of me. I tried, but I couldn’t stop them, and they took my entire world. My parents, my friends, my entire life . . . gone. Like I never existed.

Now I’m one of the boundless—I have all of time and space at my fingertips—but there’s nowhere I’d rather be than the one place I can never go. Home.

And as for tomorrow? Well, tomorrow, I have to stop an inter-dimensional demi-god from rewriting human history. He’s already erased my past; I won’t let him steal the future from me too.

Crazy, huh? Who ever thought a girl who never finished high school would end up saving the universe? Not me, that’s for sure, but here we are.

Strange how things work out sometimes, isn’t it?

Boundless is the spellbinding first book in a cosmic sci-fi superhero series you won’t be able to put down. If you’re into timeline-hopping, space opera, comic book movie fun, then you’ll absolutely love this.