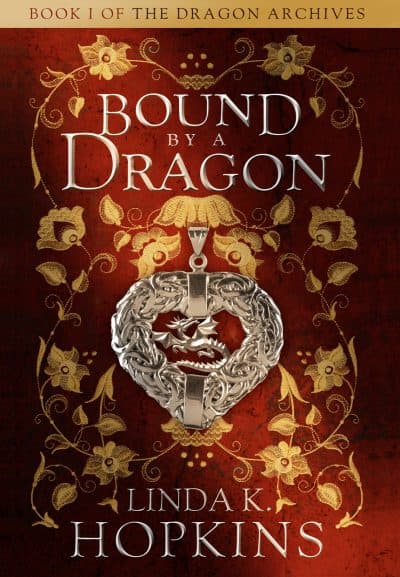 Bound by a Dragon (The Dragon Archives Book 1)

A tyrannical mother. A brutal bully. A fire-breathing dragon. An unexpected love.

Keira works tirelessly to support her family. But when her mother insists she marry a man she detests, her kind, selfless, and loyal façade gives way to a fierce determination to defy her mother’s demands. Doing so comes at a price . . .

Aaron lives with a secret. As the village’s newest arrival, the handsome charmer has caused a stir. Men are wary of him as their wives and daughters swoon. What they don’t know is that beneath the surface lies great power.

While Keira ponders her fate and plots her next move, Aaron struggles to keep his secret. When Keira discovers what he’s hiding—and the consequence it brings—she begins to question her feelings for him. With her loyalty tested, her village on edge, and her belief that she can trust him in doubt, their relationship hangs in the balance.

Will she see past their differences and forgive him or has his omission destroyed the possibility for a happily ever after for them?

Find out in Bound by a Dragon, a tale of love and courage that will captivate your heart and imagination.

Aaron Drake is newly arrived in the mountains near Keira’s village. The village girls find him handsome and charming. The men, however, are wary of the strength and power that prowl beneath the surface. They have good reason to be afraid, for Aaron has a secret that could threaten not just the growing attraction between him and Keira, but the entire village. When Keira finally learns the dark truth, it will test her loyalty to her family, her village, and ultimately, to herself.

Bound by a Dragon is a tale of love and courage that will captivate your heart and imagination.