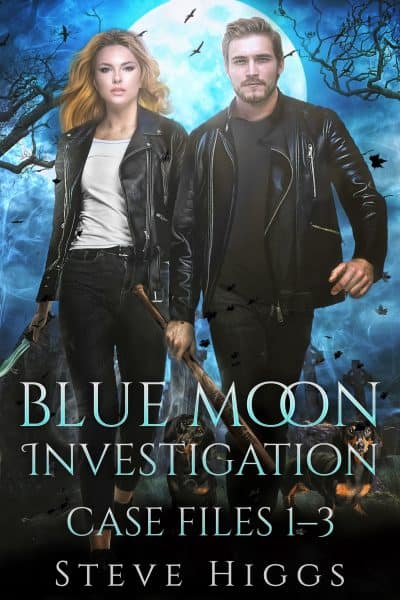 If you liked Nate Temple by Shayne Silvers, Montague & Strong by Orlando Sanchez, or PPD by John P Logsdon, then this is what you need to read next! Pulse-pounding action, paranormal detectives, and laugh-out-loud-embarrass-yourself-in-public humor. What’s not to like? Over 200 reviews on the individual books!

Delve into a world where supernatural crimes are investigated by two detectives standing alone to protect those that call on them. In the brooding, dark landscape of England, with its rolling hills and forgotten castles, the dark breeds evil in every shadow. Or stupid, some of them definitely just contain stupid.

With millions of pages read and thousands of books sold, the Blue Moon paranormal investigation series will grip you from the start and rob you of sleep as you continue turning pages until well after your bedtime.

It is action-packed, but funny, fast-paced yet intriguing, and there are 13 stories already published. Get the first 3 excitement-filled stories in this omnibus edition and save a pile against buying them individually.

Paranormal Nonsense
Falsely advertised as a paranormal investigator, Tempest Michaels has a serial killing vampire to track down and a poltergeist to catch and all because his client is just too gorgeous to turn down. He’ll need to keep his mind on the job though as his investigation soon attracts unwanted attention from the police and a local gang of vampire worshippers. They won’t be the biggest problem, though, as his friends, his mum, and his dogs are going to help!

The Phantom of Barker Mill
A hundred-year-old mystery proves irresistible for England’s only paranormal P.I. It looks like the perfect case, but someone, or perhaps everyone is lying to him, and as he closes in on the truth, he is led into a race against time that may cost him more than he is willing to pay. Oh, and his mum wants him to organize a baby shower.

Amanda Harper Paranormal Detective
When hysterical customers claim their shopping has been stolen by a ghost, the shopping mall manager calls the only paranormal investigation agency in the book. Meet Amanda Harper, Paranormal P.I. But its Amanda’s first day and nothing in life has prepared her for the bedlam that will follow. What is the truth behind the mysterious missing shopping bags? Does she have any idea what she is doing? And why, oh why, did she invite sassy BFF Patience Woods to help out?