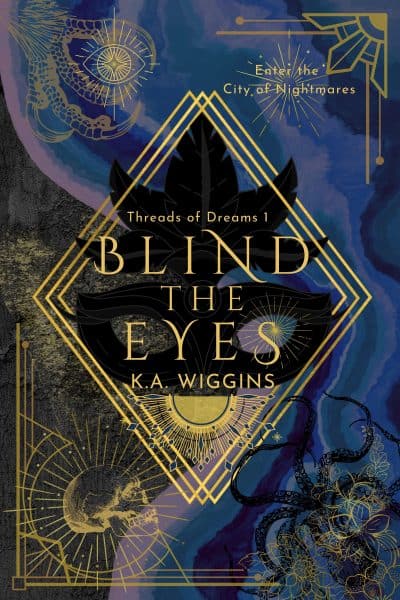 Blind the Eyes: Enter the City of Nightmares (Threads of Dreams Book 1)

In a drowned city on the edge of the sea, one haunted girl is taking back more than just her dreams. She’s about to become their worst nightmare. Award-winning first-in-series with ghosts, grudges, and gothic vibes for fans of VE Schwab, Brenna Yovanoff, and Holly Black

Child death due to abuse or endangerment (1), interracial romance (1), romance (in non romance genres) (1), minor racism elements (1), self harm or suicide (1), and spousal or parental abuse (1)
Click or tap list for details
Log in to submit or change your own elements / themes.

In the City of Nightmares, one haunted girl is taking back more than just her dreams.

In a drowned city on the edge of the sea lives a girl in a tower.

Cole is nobody. One more haunted drone among the hopeless grey masses. Even just dreaming of a better life is perilously out of reach—if she wants to survive the nightmares. But death doesn’t care about good intentions.

First, there’s the rebellious ghost who won’t stop pestering her. Then a mesmerizing, golden-eyed stranger with a dangerously tempting proposition. And to cap it all off, a shattered corpse that leads her into the middle of a deadly conspiracy.

Cole’s life is over if she can’t outrun the enforcers, outsmart the monsters, and take back her stolen power from those who would make it their own.

Her quest for truth, vengeance, and a life worth living races from the dizzying dystopian heights to the dazzling carnivalesque depths of her nightmare-infested tower.

But can she reclaim her broken city—and threadwitch’s touch—in time to avoid a bloody end?

She’s about to become their worst nightmare.

Buy this “beautiful labyrinth of a tale” today!