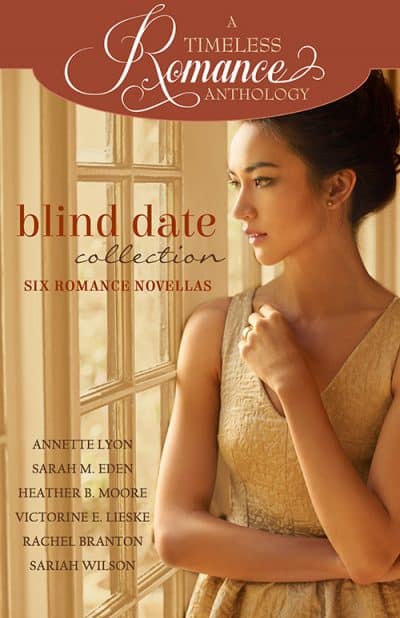 THE PROMISE THAT KATY DID, by Annette Lyon: After the death of Sue Ellen, the closest thing she has to family, Katy knows it’s time to leave the house she’s lived in as a guest and start over in the city. She quickly secures a job, but before leaving, she must honor the unusual promise she made to Sue Ellen on her deathbed: meet with Mr. Balmer. The elderly gentleman arranges for his grandson Barrett to escort her to a town dance. That evening, shy Katy quickly feels at ease with her partner. If her new position weren’t taking her from town morning after next, perhaps something could develop between them. But Barrett may not feel the same about her, and besides, they don’t have enough time to find out.

A LADY OF SENSE, by Sarah M. Eden: Eleanor Sherwood has lived her entire life under her parents’ thumb with little hope of escape. When they choose the unbearable Mr. Broadstead to be her future husband, she begs her father for another option. He arranges for her to meet Peter Havensham, who quickly proves himself a good and kindhearted gentleman, completely different from Mr. Broadstead, and utterly undeserving of a forced engagement. Eleanor cannot bring herself to prey upon Peter’s honor, but neither can she imagine a life with Mr. Broadstead. What is a lady to do when faced with such an impossible choice?

A SECOND CHANCE, by Heather B. Moore: Virginia needs a new start in order to recover from her broken marriage and vicious gossips of her neighborhood in Boston, so when her best friend Millie invites Virginia to Chicago, she goes to live with her friend’s family. But when Millie asked Virginia to participate in a double-date, Virginia knows she’s not ready to start dating again. Reluctantly she agrees, only to find out that Max might just be the man who can repair the cracks in her heart.

BRAELYNN’S BLIND DATE, by Victorine E. Lieske. When Braelynn agrees to go on a blind date, she thinks she’s hit the jackpot. Tyler is gorgeous and the perfect gentleman. Of course she should have known it was too good to be true. It turns out that Tyler really wasn’t Tyler, but a random stranger who went along with Braelynn’s mistaken assumption. So, she chalks it up to a dumb mistake until she gets to work Monday morning and discovers that her gorgeous blind date is now her new boss.

BIANCA’S HOPE, by Rachel Branton: A blind-date-gone-wrong is not the way Bianca would have chosen to celebrate the news that she might be losing her business, but saying no to the sister who took care of her after their mother’s death proves impossible. So for one date, one torturous evening, she’ll endure the company of an infuriating, heartless man she has no intention of ever seeing again. She doesn’t expect her heart to have other plans. Bianca soon learns that sometimes the unexpected is not only what you need, it’s exactly what you’ve been waiting for all along.

BLIND SPOT, by Sariah Wilson: Ria has prepared most of her life to meet her prince, trouble is, her mother keeps yanking her back to reality. So when Ria reads about a country teeming with princes, she drops everything and applies to grad school. But every blind date goes wrong, and while Ria commiserates with her roommate Tessa and Tessa’s totally un-prince-like brother Paolo, Ria discovers that all the things she thought she wanted in a man are far from what she really needs.