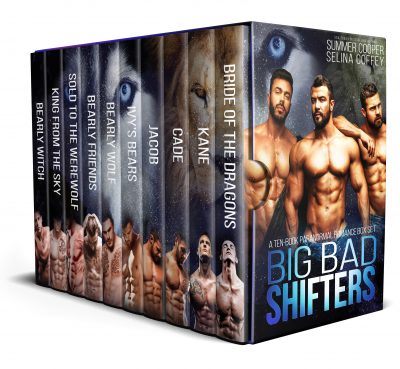 Explore your wildest fantasies with 10 sizzling shifter stories. This collection of steamy, monogamous, and menage paranormal romance books will make you blush and have you begging for more.

Explore your wildest fantasies with 10 sizzling shifter stories. This collection of steamy, monogamous, and menage paranormal romance books will make you blush and have you begging for more.

Bride of the Dragons
Life in a nunnery or marrying two men – that’s the choice a woman without dowry has to make.

Kane (Alexander Shifter Brothers 1)
A psychic finds herself drawn into the world of dragon shifters.

Cane (Alexander Shifter Brothers 2)
A dragon shifter tired of false rumors gets himself a mail-order bride.

Jacob (Alexander Shifter Brothers 3)
A dragon shifter will do anything for his brother, even get involved with the vampire queen.

Ivy’s Bears
An intern finds herself struggling to choose between her billionaire boss and his best friend.

Bearly Wolf
A forbidden romance between a half-breed and two werewolves destined to rule the clan.

Bearly Friends
A trip to the mountains leads three friends unexpectedly into the world of sexy bear shifters.

Sold to the Werewolf
A woman desperate for help turns to a biker gang leader.

King from the Sky
A curvy woman discovers an injured man shifting back and forth from lion to man in her clinic.

Bearly Witch
A witch casts a sexy billionaire playboy with a dark secret in her show.