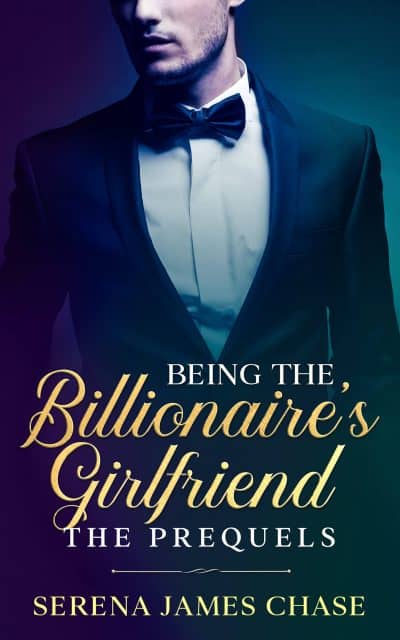 Being The Billionaire’s Girlfriend, The Prequel

Take a peek inside the provocative summer nights between billionaire Alan Mitchell and Brianna Walsh. The Prequels: Complete Box Set features the first three books in this unconventional romance.

Alan Mitchell knows he doesn’t need to ask twice for something he wants. When he snaps his fingers, everything his body desires appears on a silver platter. And yet, his dating life never ceases to frustrate him. But when he hires an escort to be his fake girlfriend, he realizes he’s been looking for what he wants in all the wrong places.

Brianna is an escort. However, when she meets her latest client, a young billionaire, sparks begin to fly, in all the wrong ways. Can Bri withstand the fever that itches to take her? Or will the heat consume them both?

He has all the money in the world, but it’s not enough to buy what he really wants. Her love.

Alan Mitchell is used to getting what he wants. Except with his ex-fiancée. And sadly, he can’t avoid her much longer. He will not face her alone, though. When they meet again, he’ll have the perfect woman on his arm. Hiring an escort was all part of the plan. He just never anticipated how complicated everything would get when he started having very real feelings for his fake girlfriend . . .

Brianna Walsh has a plan, too. She’ll continue working as a high-priced escort as long as it suits her, then she’ll retire and settle down with her loving boyfriend to live a nice, peaceful life. In the meantime, she’ll happily play the part of the sexy billionaire’s girlfriend. After all, it’s her job. But she won’t fall for him. Or so she keeps telling herself . . .

A contract ties them together, but their ever-growing feelings tempt them to break every rule. And right now, only one thing is certain.

Their lives will never be the same . . .

No matter which path she chooses, someone will end up heartbroken. If she’s not careful, it’ll be her.

Alan Mitchell and Brianna Walsh’s relationship is . . . complicated. It has been from day one. Now, they’ve finally come to an understanding. She’ll still be an escort, but she’ll only have one client.

The new arrangement was supposed to simplify everything. But it didn’t. Because Alan wants more from her than she’s ready to give—especially since she still has a boyfriend who is not-so-patiently waiting for her time as the billionaire’s paid companion to end.

And the more time she spends with Alan, the harder it becomes to remember why their relationship must remain professional.

Breaking their contract would solve so many problems—for both of them. But would it also break their hearts?

Being the Billionaire’s Girlfriend Saga is a sometimes angsty, occasionally witty, always steamy contemporary romance featuring a billionaire who usually gets what he wants, and the strong, smart heroine who lets him buy her time, but makes him earn her heart. While the prequel does not end in happily ever after, don’t worry: Bri and Alan will eventually find their way to HEA.

***Warning: The heat level on these books are high! Intended for 18+ audiences.***