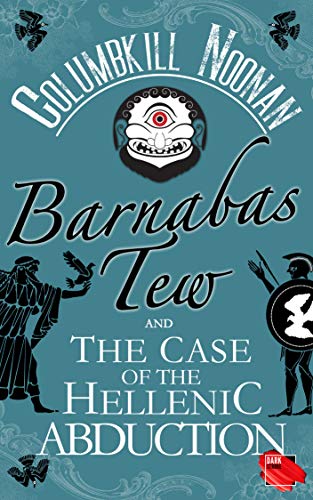 The Greek gods are tricky, but Barnabas and Wilfred have learned a trick or two of their own in their time going around the “mythological block.” They think they’ve found a way to outsmart the gods they’re in, but are they wrong? If so, then the dreaded Tartarus awaits!

Demanding Greek gods. A world of intrigue. A mysterious helper.

Zeus is used to getting what he wants . . . but that was before he met Barnabas Tew!

Barnabas and Wilfred, the unluckiest detectives ever, are enjoying their time in India, working on mastering their emotions and learning how to do all sorts of interesting yoga poses. They feel as if they’ve finally found some peace in their lives.

Everything changes, though, when Zeus whisks them away from their idyllic retreat and demands that they solve a case for him.
Having no choice, they reluctantly accept the job but quickly come to realize that nothing is as it should be. Zeus’ motives are suspect from the beginning, the rest of the Greek gods and goddesses are untrustworthy at best, and Barnabas soon finds his temper hasn’t improved at all during his time in India.

Who is the mysterious lady who keeps popping up just when they need her? Is she friend, or is she foe?

Will Barnabas and Wilfred figure out what’s right and what’s wrong in this topsy-turvy world of lies, intrigue, and trickery? Or will the Greek gods and goddesses prove too much for them?